A Backyard View From the Roof

Always carry your camera.  You never know when you'll have a chance to take a picture that may speak to you in the future.

I wouldn't call myself a photographer, the next time I get paid for a picture will be the first.  But my pictures have made it into some independent movies and are all over this blog and other places.

I do enjoy looking at the back end of a viewfinder.  Once in a while I get a shot that some people, other than me, will appreciate. 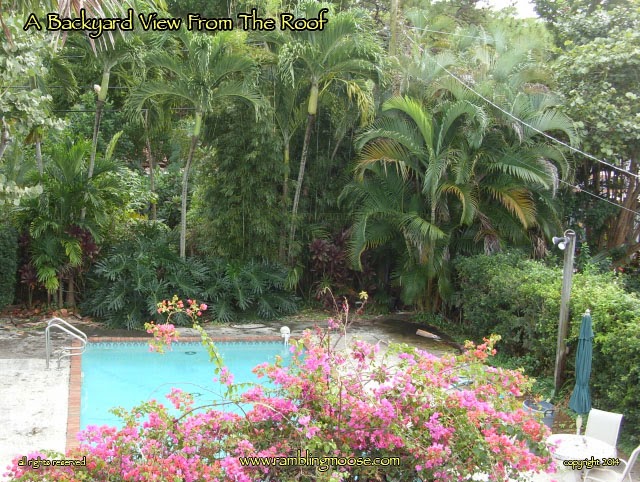 Since the Great Orb In The Sky made an appearance today for the first time in about a week, I thought some sunny view would be perfect.

Being a homeowner, I see this picture and ask myself why I didn't bring the hedge clippers up there and take care of that out of control bougainvillea at the foot of the roof.  There are some things that are just easier to do when you're on a roof.   Unfortunately once the tiles get glued in place, I won't be up there again.  Probably not for another 15 years or more.

Seeing that I'm built for skating long distances instead of climbing them, it is probably for the best.  I'm really wobbly on a ladder and not exactly the most graceful in any case.   A bit ungainly for climbing is how I'd describe my own particular build, but we are our own worst critics.

At any rate, that's Winter in Wilton Manors.  It's supposed to be the Dry Season, but nobody told Mother Nature and at least the pool is not drying out.  After all, you could be in the Midwest suffering from a Polar Vortex and having outdoor temperatures below the freezing point of Carbon Dioxide.

No thanks, I'll take the rain.  At least the grass doesn't have to be cut this week.
Posted by Bill at 10:02 AM