I said before a Roof is a system.  It is a collection of parts designed to work together to perform a job.

In this case, the first part was the tar paper that was laid down once the old roof was stripped down to the plywood deck.

Having gone through a day of hammering, sawing, and general noise, we all took a breather.  I know Rack did.  I sure did as well.  Glad it's over with.

We went through the weekend with just tar paper on the roof, and it held nicely.  Having a front come through with some rather serious rains proved that point well.   The house wasn't as cool those days since instead of having terracotta reflecting some of the light back to the skies, we had a black roof.  The Florida Room was decidedly hot since there was nothing there as insulation.

The day started with Julio ringing my doorbell.  Rack greeted him with barking himself sideways.  Nice to know that Mr. Dog is finally finding his voice.

I was told that the work today would be quiet.  There wasn't going to be "that much noise" but it would be "Steenky".  His emphasis.  While Julio had a little bit of an accent, he specifically stressed that word and rolled it off his tongue so that he would warn me that we may be gassed out.

It turned out that it was Steenky indeed.

They chased my Jeep out of the Carport and took over the yard.

There was an ugly trailer that was spattered with tar which would cook the five blocks of tar that were delivered to the yard.  We had a delivery of sealant and tar paper to the roof, which was amusing to watch.  Most home improvement stores have to be coerced to deliver to the house, these folks delivered the materiel to the place it was most needed, 15 feet above ground on top of my house.

Tar is slightly less thick than candle wax, and more brittle.  You have to heat this stuff up in order to apply it.  This would be where the noises began.  I happened to be seated out of view of the window when this all started up.  By "This" I mean a rocket launch began that wouldn't stop until lunch time.  They fired up a propane jet to melt the tar so that it could be loaded into buckets which would be spread over top of the tar paper.  Then a foam underlayment would be bonded to the tar and it would form a solid unit to block the house from the elements.

The roof is held down by straps to meet the Miami-Dade Code for roofs.  It's not going anywhere, or so that is the plan. 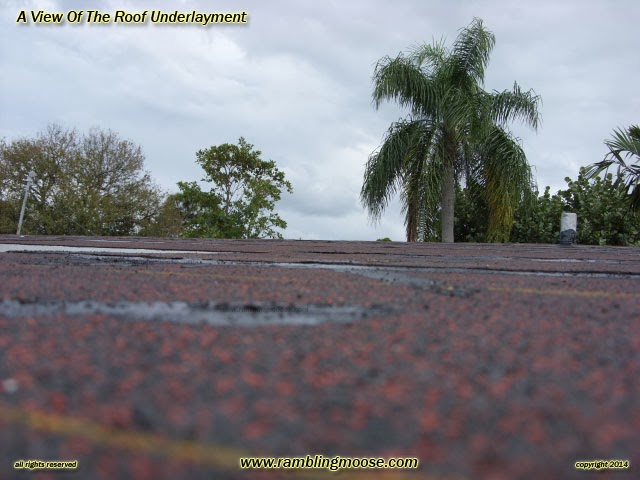 There were five blocks of tar that got melted.  Each time they got dropped into that splattered green hopper, a giant cloud of Steenky grey sulphurous smoke would rise up and fill the yard.  Since the front was coming through and the winds were settling the cold air from up North, the winds were coming from the "wrong direction".  This meant that instead of the winds blowing the smoke off the property and away from the ocean, they blew the smoke toward the house and to the East.

In other words, the house smelled of Steenky tar instead of the usual mild cooking smells that any house had.

Suck it up, it's time to deal.   The noise was more of an annoyance to me, but it sent Rack running off hiding whenever it happened.

One thing we noticed.  Rack seems to be growing a thicker skin as a result.   His energy level was up and he was bouncing around once they finished laying all that tar on the roof.  The walk at 5pm was one you would expect with a puppy, full of energy and joy.

So putting up with a half day of a rocket engine in the yard, steenky smoke, and an occasional clomping around on the roof was worth the effort.

We have the underlayment down.  Next we have to wait for the barrel tiles to arrive.   That happens in one to three weeks when the tiles are made in Miami and trucked to us here on site.
Posted by Bill at 10:02 AM