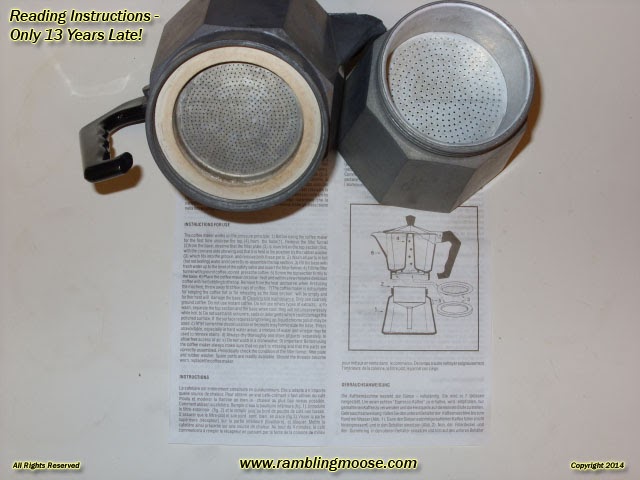 I was having a thirsty morning.  I had already had a large mug of third-caff coffee.  Went down deep and smooth just like it always does in a big french press mug, and I wanted more.

Being the curious type, I wanted something a little different.

Oh!  How about the Espresso Maker?  I can make some Espresso!

I got the maker out, poured in the water to a line in the metal.  One scoop regular coffee, fill to the top of the filter with decaf, but don't press down - simply smooth it.

Now to the filter.  The dishwasher didn't really get all the grounds last time, so I pulled out the rubber O Ring.

I found out a few things.   The Espresso Maker was made in 2001 because they date-stamped the inside of the machine.  The other thing was that the rubber ring was shot.  It came out in a couple pieces, one big ring that left pieces behind because it was "oxidized".

Luckily, when I bought the machine I had gotten a spare ring from a company that is long gone.  I also kept the instructions.

You know, the British have a wonderful expression for this sort of thing.  It went "Pear Shaped".  Meaning not according to plan.  A "Royal Cock-Up".

Yes, I read the instructions.  They were written in many languages, English being one of them.  I should say "Engrish" as they were written as someone would if it weren't their strongest language.   Bless their hearts, these Italians tried.  Oh yes, they tried.

Reading these things that I now thought of as "Stereo Instructions", I learned that I was correct.  Never pack your grounds, it will make for a bitter mug of espresso.  Don't use "too finely ground" coffee or else it will plug up.

It also told me that I had the thing put together wrong for 13 years.  So I put the metal filter in "upside down" - so that holding it so I could see it, the filter went in like a cup - high side of the cup pointing up toward me.  Concave side up.  Just like the instructions said.

I scratched my head, then sealed the thing in place with the new ring.

It moved around... this wasn't good, but Italians have made espresso for centuries.  They invented the bloody thing!

I remember my "Off The Boat" Italian Grandmother and how she had exactly this same machine, or an earlier version of it, that nobody at the house could figure out.  It languished in the back of the cupboard before it disappeared long after Grandmother Rosa went to the coffee shop in the skies.

Having used this machine for 13 years with the metal filter flipped "wrong" I sealed it up and put it on the burner.

Walked out to the front room to do some tasks, I heard a disconcerting sound from the kitchen.

My little espresso maker was venting steam out to the world.

Ok, sure, it's a cold day in Florida, it was in the 40s, and we could use the extra heat and humidity, but not from my espresso machine!  I gingerly rounded the corner and was greeted by a cloud of steam.

"Stanley" would have been proud, I was emulating his steamer.

My stove was now colored tan from a cloud of espresso being pushed past that O Ring onto the burners.  There were little fireworks of grounds extinguishing themselves on the glowing red burner.

I stepped back.   Thoughts of "She's gonna blow, Captain!" came to mind.  Scotty wouldn't have designed something like this on the Enterprise, something was done wrong.

Reaching into the cabinet, I donned protective gear.  I didn't want an explosion.   Gingerly grasping the now rapidly warming top of the maker, I put a gloved hand onto the bottom and began to turn the machine to tighten the grommet and seal more.

I had to put out a flaming hand at this point.  The oven mitt popped into flames as it hit the red of the burner.

An explosion was averted, though.  The steam was focused into two hot jets out of opposite sides of the machine.  Two jets of coffee scented gas escaped and continued to paint the burner as espresso flowed slowly out to the top.

It eventually slowed as the water boiled off.  9 shots of espresso is not a lot of water to boil away at pressure, and I ended up with a truncated mug of brown goodness.

So what did I learn?  Either I can't read, or need a new pair of glasses.  I let the machine cool and vowed to flip the filter back the way it was before I started.