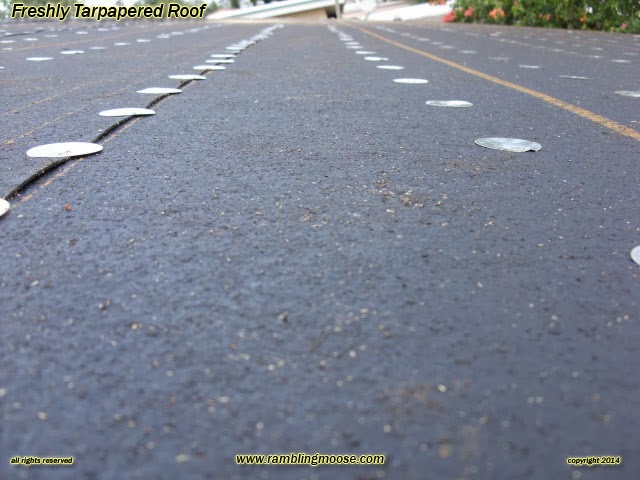 It took the roofers a day to completely remove the old roof and place down a new layer of tar-paper.  A roof is more accurately called a "system" since it's a collection of parts that act as a whole.   Its job is to keep the weather out of the interior of the house and to keep the wood below it dry.   That's not really a big problem in the Desert areas of the Southwest, but here in South Florida, we get 50 inches of rain a year, 40 of them in the six months from June to December, the wet season.

After about 30 years the old one failed and we needed to act since some of those timbers were getting wet.

They ripped the old roof off in a morning, and in the afternoon they put up the tar-paper.  Yes, That Quickly. It literally was a frenzy of activity at one point.  Seated in the living room I heard in front of me one set of nails go right to left, and behind me on the other slope of the roof, they went left to right.

At The Same Time.  In Quadrophonic Stereo Sound.

The dog didn't calm down until Sunday when with all the stored up energy of a day of roofing and a day of panicking, he became a frenetic ball of black and white tightly coiled furred energy.

For inspection they had bolted a ladder to the house, I waited for the right time to climb.

I had never been on the old roof and not exactly a climbing kind of person, I gingerly went up onto the new tar-paper to grab this picture and a few others.  Interesting view up there, you can see the neighborhood from a new angle.  Everything was in neat rows on the roof, as well as the neighborhood.  You couldn't see as far as you would expect since it had been more than 7 years since Wilma and most of the trees have grown back.

But at least the work was done - for a few days.   They will come back as soon as the inspection takes place to put down a layer of tar, then another layer of tar paper.  I'm told it won't be as noisy.   Rack will appreciate that as will I.
Posted by Bill at 9:38 AM