How Can Your Dog Dance To The North If Your Compass Is Broken?

Ever since the article came out, we've got something else to obsess over.  Dog Walk OCD, I guess.

In the early morning hours, walking through the city, we've come to notice that there's a routine.  It's not a perfect one but it is ours.

There was a scientific discovery that dog owners are chuckling about all over and now I join the ranks.  The idea is to take your dog out for a walk.  Eventually dogs will do what dogs will do and squat to relieve themselves.  When they poo, they will try to align themselves on a North-South axis. 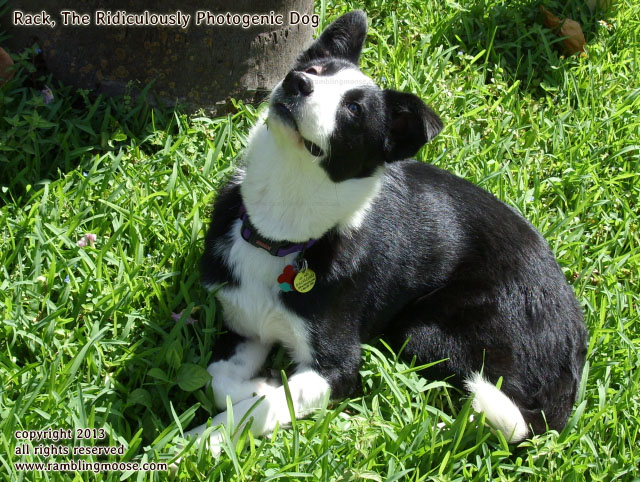 Rack's compass doesn't work.  It may be sticky, but I've noticed he's not very good at it.  Even if he is pointing North in this picture, he just doesn't always find his way.

We will walk around 3 to 6 miles a day, and when he gets the urge, there is a ritual.

First we start to speed up.  His pace gets a bit quicker.  Walking With A Purpose I suspect.

Then he will begin to veer off the pavement.  Not knowing why this happens, I begin to pull him back.  Steer him back to the walkway.

Of course he's trying to go away from the street so I'm beginning to get clued in as to why he wants to annoy the neighbors and impose himself on their privacy.

So I have a 45 pound black and white dog stretching my arm out.  I'm pretty tall, but doing a Stretch Armstrong act is usually what follows.

Then the spiral happens.  "It's Time To Dance, Rack?" as he begins to spin around.  It is never always one direction, not so that we have noticed.  The path looks like a nautilus shell, beginning to curve inwards in ever tighter spirals when he stops.

Everyone then takes notice.  If the street points due North, has he ... nope!  The theory goes that you're supposed to have a dog that aligns themselves on a North-South Axis, someone has to find this dog's compass and give it a little nudge.   He just hasn't found his North yet.

That spin may have thrown him off.  The dance can get quite frenetic, spinning around like a Whirling Dervish looks comical, as he does this spin around the drain thing.

Perhaps he's distracted.  There could be a leaf moving on a tree 40 miles away in Miami and he would notice it.  You just try to point your butt when something especially interesting happens as you're spinning yourself dizzy like a top.  Go ahead, I'll wait, but don't fall over.  It could get messy if you knock over a lamp.

The reality is that the study was done with dogs off leash.  As fast as my Rack is, I don't think he's ready for Off Leash Walking yet.   There may be a dog he's friendly with a block and a half away and I was never really a fast runner.  Distance, yes, but speed, no.

Once he's settled in, science aside, the fun and games are over and the work begins.

Does someone have a plastic bag?
Posted by Bill at 9:40 AM