Writer's Block, the roof, and My Dog's Look Of Fear - Picture

I had gotten to a "Logical Breakpoint" and stood up.  Having walked the dog already this day, I wasn't expecting any weirdness around the house.  I was wondering what I would concentrate on this morning.  I had a blog posting to write and nothing came to mind.  I've also got a number of web pages to complete for the board and for CANA here in town.

It's been wet for a couple days, and today was going to be a 50 percent chance of storms.  If you have ever lived in South Florida or visited for any length of time that means that there is a 100 percent chance that 50 percent of us will get monsoons.  The rest of us may get wet or may not.  Good luck guessing which group you are a part of.

I told Kevin that meant that nobody would be here to work on the house today, just too wet.  It's warm enough but too wet.

After a couple of cool days, this was the first day that we'd had with a morning low at or above 70F.

In that moment, I knew I was not going to have a quiet day.

My roof had failed back in December and for the better part of the holidays I was living an I Love Lucy era episode of a TV show.   It was "1950's Sitcom" life with pans on the floor to catch the rain that ran down the roof and onto the desks in the Florida Room.   The roof must be replaced.

We went through the two days of stripping then resealing the roof.  Decking was repaired.  I got used to having access to it and even climbed up there to cut down the bougainvillea that was growing due up instead of onto the arbor back behind the windows in the Florida Room.

Now the truck was disgorging its cargo of men, machines, and glue.   I was going to have a day of banging and sweeping.

These days, installing a tile roof meant that they would glue them to the roof.  Who knew?  I also didn't expect that they could do anything with glue on a wet roof, but apparently my knowledge of Project Management doesn't extend to construction.

They climbed up onto the roof and began moving the tiles.  Each tile was a variegated thing.   Terracotta with black and tan splotches.  Should look quite nice and "distinctive" as the salesman said.

Now it was getting installed.

I knew Rack wouldn't like it.  When I came back in from taking out the trash bins, I walked into the laundry.  It's in the No Go Zone, or so I thought.  He walked past the trashcan monster and right into the laundry to the Port Hole.   I have two glass panes in the door so Rack can look out like Lettie did before him.  He's just discovering it.   I immediately comforted him to let him know that this is safe for dogs and went back to loading the dryer.

Rack turned tail and vanished.   If you have never met my dog, he's a McNab.  Incredibly intelligent and sensitive, he still has issues with random noises from when he was abandoned by his first owner at a shelter.  It wasn't going to be a good day for him.

He is also fast.  Very fast.  He vanished silently like a dart into the main part of the house.

Closing the dryer, I finally found him after doing a perimeter search.   Next to My Big Green Chair in the living room is a table.  It has an inlaid leather chess board and sits high enough off the ground to play chess or any other game you might like.  It also has his third mat there and he's taken to sitting next to me when I am watching TV.  I can reach down and pet him whenever I like.  That is one of the nicest things of having a dog, someone nearby to comfort you when you need it, and you can be reassured all is well by his presence. 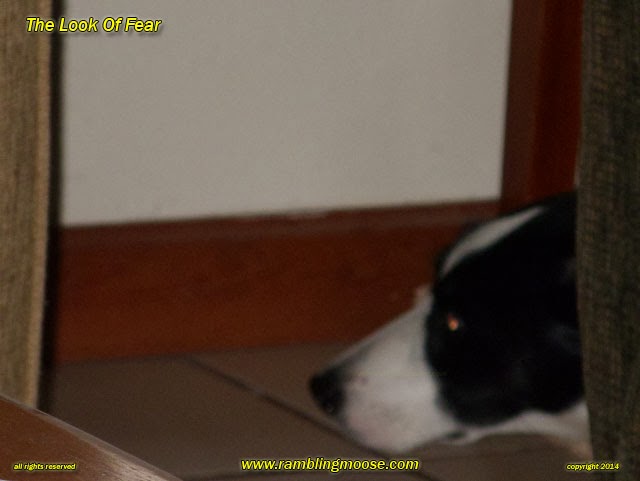 Not today.  He's hiding there.  Nose on the floor, he looks up when the noises stop and start.  I can't say I blame him for hiding.  I did too.  I've got my coffee next to me on my bouncy Poang work chair, and the headphones on.  Thankfully they're noise cancelling.  They muffle the pounding that is outside my own head causing the pounding on the inside.

It doesn't do a thing for the dog, but he needs the exposure.

You see with a dog with Noise Issues, you have to make sure that he gets exposed to some noises but not too much.  It is a thing of finesse to find out how much he can take.  Then you have to purposely expose him to a little more each time.  We do this a couple times a week in front of Wilton Manors City Hall on the wall.   Trucks go by.  People walk past.  Dogs bark.  Horns blow.  Rack sits down and shudders.  Then shivers.  Literally vibrating, he will sit for the time we're there.  Each time we visit, it notches down a slight bit in its intensity.  By the time we leave, he's more than ready to go, but the shivering has stopped.

This will be one of those days.   When they put the first two layers down, Rack was a mess but when he recovered, Rack was better than he was the day before the chaos reigned.

Lemonade.  I think we will make lemonade out of those lemons and sit here in the banging.
Posted by Bill at 9:38 AM