A Field of Yellow Flowers

I have a secret.  Some days, I just walk out the door with the camera in hand thinking I may need this to jar my memory to write.

One of those mornings where I wake up way too early or way to late, and the mind just is clear.  Too clear.  A morning where clarity of thought is so strong that you can hear the winds whistle through the ears.

A mental dial tone of a day.

Stand up to make coffee and breakfast's first course, and realize that the sun is just now coming up.  Looking out at the pool it's beginning to rain for the first time in a week.

The dog wants a fish oil tablet as a treat, then the yogurt and cranberry that hasn't yet been pulled from the refrigerator.  Tea Kettle is whistling to make iced tea for later and coffee for now.

One ounce of grounds weighed, 18 ounces of water, two packets of sweetener, two level teaspoons of creamer yields one perfect mug of coffee.   Remember that kiddies!

By now, anyone who takes pictures regularly has a large library of memories.  A catalog of photography that serves to jar your memory of things that sometimes should be shared, and others that should not.  The trip to the beach where you climbed into the giant conch shell and couldn't get out easily but got a picture of it as you bent over to retrieve your right shoe comes to mind... 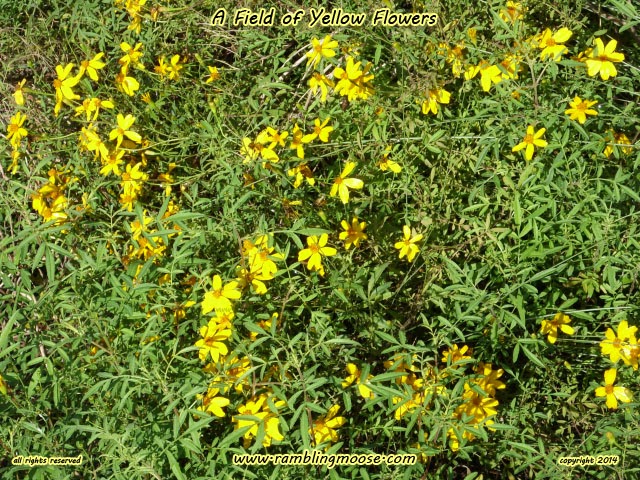 But there's this picture of little yellow flowers.  What to do with them?  They're really quite nice, but look like the white ones in the yard that you're always trying to pull since the seeds get caught in the dog's fur.  A nice innocuous native species that should be propagated because they do so well with so little care.

Still getting settled into the New-To-Me computer it's time to fire up Photoshop.  Oh great, the fonts got confused again.  No, using the official font for the road signs in Poland would not quite work with a "softer" picture like this one.  Instead of Drogowskaz, try MV Boli again, it is scripty but not Comic Sans.

Ok, find my color for the stroke, and add the titling.   Hide the URL inside the photo just in case someone got slick and tried to borrow the thing commercially...

There we go, all nice and pretty.   Nice new shiny object for the blog.

They will never suspect that each of those beautiful yellow flowers are smaller than the size of their little pinky and that you managed to feed some more mosquitoes when you went out to take the photo.

Wet nose on the right arm and a wiggle says Pay Attention to Me!  After all, it is all about the dogs, right?

As Rack jolts my head out of the stream of consciousness, my mind jerks back to the present.  That, and the UPS guy just drove past.

Waiting on him... he's got the fan for my backup computer.  I'll have to take apart the laptop and do a photo shoot of that.   Most people never even considered that they can do repairs to a desktop, let alone a laptop computer.  That will have to wait for next week when the little box gets here with the smile on the side.  For now, I've got bigger fish to fry.  After all, that iced tea is calling and the dial tone just turned into a growler.

The mind has been off the hook long enough, the stream of consciousness has broken.
Posted by Bill at 9:58 AM