The Air Plant That Saved The Tree - Picture

I guess you could call me an indifferent gardener.  I get involved in other projects and gardening tends to be on the tail end of the list.

Things get stuck in the ground and tended to when time allows, and most of the plantings in the yard that I have done got there because I know they're easy to grow rather than their being a showcase plant.  I have my orchids on the irrigation system for that.

I do enjoy these plants, I just don't like bending over and "putting my back out" in order to have a yard that looks like something off of a magazine cover.

On the other hand, I do know enough that when a special plant colonizes a spot, leave well enough alone. 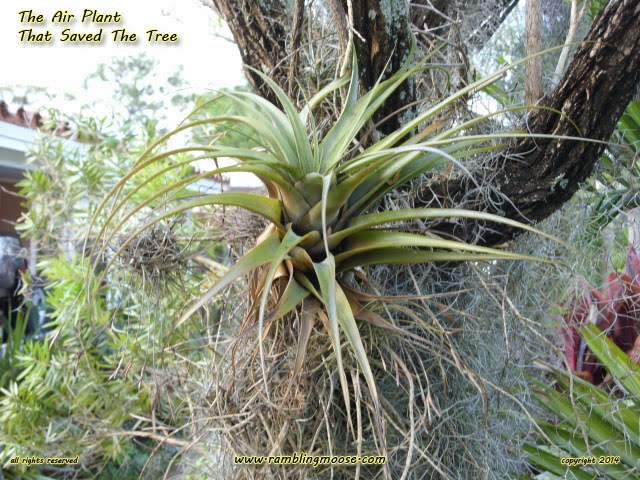 Down here we've got these air plants.  At least that's what you call them when you stumble across one glued to a seashell with the word "FLORIDA" engraved on it.   They get back home, wherever that is, and eventually die.

Why?  Air Plants, or Tillandsia, are fairly finicky on what they need to survive in comparison to your garden variety marigold or other generic plant.  The best luck I ever had was to keep one in my bathroom shower in Philadelphia and squirt a little liquid fertilizer on it from time to time.   That little thing lasted a year.

In the case of this particular plant, it's been out on my tree for more than four years now.  I've picked it up off the ground and stuck it in a different spot a number of times because the tree is sick.   It's being eaten by termites and is slowly dying.  On the other hand, it still soldiers on with a few flowers here and there.  I guess that a Bottle Brush Tree is a hardy beast, even if it is an exotic Australian visitor.

That dying tree is what the Tillandsias want.  The nutrients that leak off of the bark when it decays get into the plant's leaves and feed them.  It works with Spanish Moss as well and that tree has great beards of the stuff growing on it.

When this Tillandsia flowers it will die.   After that, the gloves are off.   I will chop the dead off the tree and probably remove the entire thing at some point.  Its replacement was an involuntary palm tree that insisted in growing in a pot in my back yard near the pool.  That tree is now over 4 feet tall and grew 2 feet since I dropped it there.

But that blasted Bottle Brush tree just refuses to give up the ghost.

You're safe for now Mr Bottle Brush Tree, but when your Tillandsia goes I'm out there with a saw!
Posted by Bill at 9:58 AM