I Hear You're Having Another Snowstorm 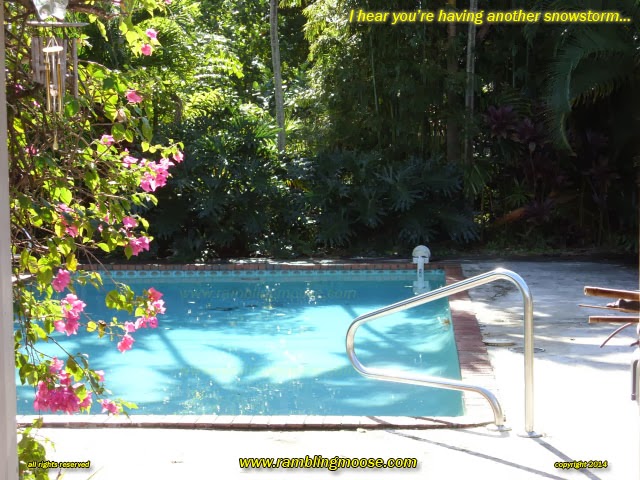 My cousin posting a picture of bougainvilleas on Facebook got me thinking.

No, it's not another rant about how bad the weather is up North.  This would be the week I traditionally would take vacation.   I would haul my bulk into the Jeep, get out of Philly for a week to 10 days, and thaw out.

Literally.  By this time of year, I'd have a nagging "winter cold" that was my body telling me with a stopped up nose, that I was not designed for standing on an elevated train platform in 15F temperatures day after day waiting for the R7 to roll.

The second week of February is the coldest one of the year in the Northern Hemisphere.

Ok, so it's plus or minus seven days either way of February 7th.

It's been warm this winter though.  We got our two weeks of "cold" already, and I am hoping it happens again.  It helps reset the environment here and gets rid of those ex-pets that snowbirds abandoned thinking they'll do alright outside.

My weather applet says it will be 83 today, my pool water is at 70 and holding.

My concern is that the pool should be down into the high 50s by now.  It's not heated and the deep end is still way too cold for my tastes.

Since we're also three months from the great stock up month of May, and four months from Hurricane season, I'm thinking that it's a bit warm for this time of year.

I'll take a cool February.  It usually means that hurricane season will be weak.

We are overdue for another near miss.

I'm still getting rid of the last of the bottled water and Mac and Cheese from last year.  There's still canned ravioli on the Kitchen table that got co-opted as a pantry.

So believe it or not, while I despise cold weather, I'd welcome some of it now.

In the meantime, go have a swim.  The water's a little cool for us down here but you'll think it's fine!
Posted by Bill at 9:28 AM