The Sassafras and Bee

Despite sounding like a rural pub somewhere in Kent, England, this is more descriptive than that.

I had to get out of the house.  I simply needed to be "elsewhere".   We all get that way from time to time, but when I do, I tend to take my camera.  You just never know what you will see when you're out.

Luckily this particular day there were a lot of flowers on a bright sunny day.  I think that the Northeast was also getting another foot of snow on that day, but there has been a lot of that going on this year.

Seeing the tree with these little flowers, I thought that I'd take a picture.   I'm also quite afraid of bees, no matter what the context.  That morning must have been a good day for them since the tree was drawing them near to it in an orbit. 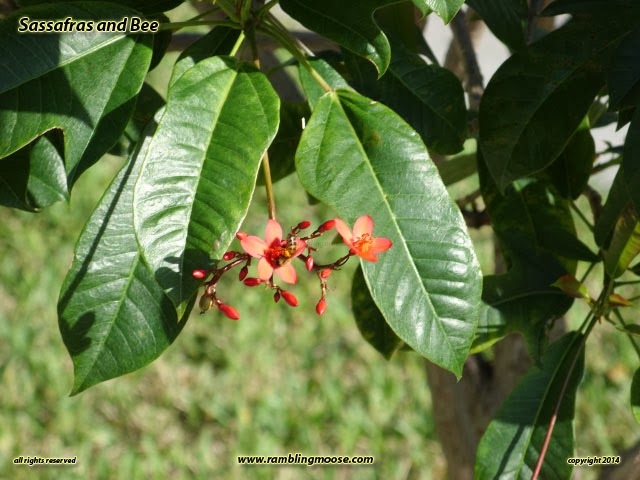 As I stood next to the side of the road, dodging bees and traffic with camera in hand, I realized that this was a Sassafras.  These grow anywhere in the Eastern US, from Florida to Maine and west to the Mississippi, and up into Ontario, Canada.

Eastern US and "Beyond" would have been more concise, according to the map.

They aren't all that showy.  Leaves that look like a mitten to me, usually having a thumb on one side of the main body of the leaf, or a thumb and a pinky finger spread out.  The flowers are quite small and there can be berries.   Sassafras trees tend to fade into the background clutter of a broadleaf forest, but they do make an interesting choice of a tree to drop into a yard.

To me, this tree reminds me of the one in my yard in the house I grew up in Cherry Hill, NJ.  They tend to be what I call "Kathie's Trees".  Kathie is my godmother, and she moved down to Florida when I was a pre-teen.  Just before she left, we wandered through my yard as she pointed out the various things in the clutter of the area near the little creek that ran through our neighborhood.   Up on the bank was a smallish tree that she pointed out to me saying "This is a Sassafras tree!".  She told me that it was a fairly important tree, and that you could make medicines and root beer out of the tree.  Gathering up a few of the mittens, we moved on to some of the other wildlife habitats in my neighborhood.  There were quite a few of those around, I was lucky to live where I did.

Apparently there are some uses for the oils in the bark and roots that predated modern medicine, and if you don't need to self medicate, Root Beer is always a welcome drink whether it is in your refrigerator or a Kentish Pub.

I've never made sodas and root beer at home, but it is an intriguing challenge.  I promise not to disturb the neighbor's tree as it looks rather nice where it is without being molested for its bark.  I may just leave that challenge alone, I'm the kind of person who would try to make the stuff as locally sourced as possible.  Knocking on the door of a neighbor and asking if I could borrow a bit of tree bark sounds weird even to me.

There are recipes for that sort of thing, and they have a lot of herbs and spices in it.  Root Beer was made as a way to make a health tonic or to get medicines into the body in a low dose as a preventative in a tasty way as possible. Since it is difficult or impossible to locally source some of these medicinals, your best bet is to live a healthy life and drink commercially prepared root beer for its taste, Diet or Regular.
Posted by Bill at 9:53 AM