A Tale of Two Dog Beds

Once a week for me.  Typically three loads.  Two hot, one cold.  It soaks up most of an afternoon.  Just muscle your way through it and hope that the machine doesn't toss the crap that is stored on top onto the floor.

As it is, it's hard enough to get in there.  I'm a tall guy and it is so cramped that my shoulders will brush the wall and the dryer at the same time.

I can set the wash up the night before so that it will be done when I wake up in the morning and enjoy that perk of modern life.

But for the main part, it's a banal occupation that you try to just get through until the next task.   Mopping the floors anyone?

When I do those washes, it upsets the groove of the house.  Oscar the parrot will growl at me when I walk through with a large towel to fold.   He thinks I'm about to cover his cage and he really dislikes that.

Rack just tries to hide.  He has a few hiding places, and for the most part sits so he can watch me.  I'm not that exciting on laundry day, so he falls asleep.

This particular laundry day, I had been busy and distracted.   Not a good combination.  I had someone to help out, rescue more like it, and once that was done, I could hear the washer beeping from the driveway.

Shrill "beep-beep-beep" that you can hear outside of the house through the leaky windows that tells you you've got more to deal with.

*sigh* at least I'm not at the river with a rock.

I dealt with that load and tossed it into the dryer.  This was the second load of the day, my Dog Beds and Towels.   Everything is washable.  If it isn't it doesn't last around here.  I have a blue blanket that is beige because all the blue washed out of it years ago when I got it for Lettie back in 2001.

Since Rack may want to wander off to the bedroom, I put a fresh tan throw on the floor.  I thought nothing of it later when I went into the bedroom at the end of the wash to reassemble the bed when...

The phone rang and another emergency to deal with.   I wandered out absentmindedly tossing the bed on the floor next to the mat.

Now, Rack, he is an intelligent dog.  Amazingly smart.  With intelligence comes preferences in keeping life Just So.  He knew that I meant that the blue dog bed should be on top of the tan mat.   Since he doesn't have opposable thumbs, he just didn't know how to make that happen. 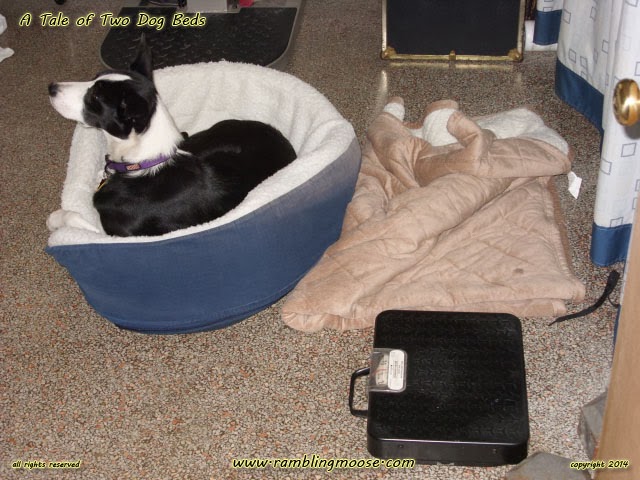 I couldn't get him to get up out of His Bed, and since I won't let him on my own, I simply let him be until he heard a motorcycle come down the block.

He likes Motorcycles.  I lie to him and tell him that one of his favorite people is riding each and every one and that got him past his fear.  "Hey, Rack, That's Kirby!" and he's happy.

Trotting out of the room to see if he could see his buddy, his bed finally made it back on top of the mat for extra padding and all is right in the dog world.

Sometimes you just have to lie to a dog to get your laundry done.
Posted by Bill at 9:08 AM