I had someone ask me how I go about putting pictures together for the blog.  I explained that since my camera is basically a digital "Point And Shoot" camera, I had to do the zooming in what can be called "Post-Production".

I take a picture, zoomed in as well as I can.  Then I bring the thing into a viewer and crop out the unneeded stuff.

First, download and install Irfan View.   It's a Swiss Army Knife of a graphics program.  It will let you do most of what you want to do with a picture.  It won't edit pictures, but it will let you copy sections out of them and paste them into another place for use. 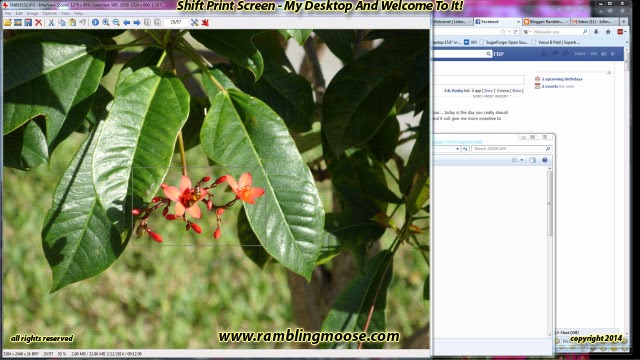 Open the picture in Irfan View.  In the case of this particular picture, I wanted the flowers in the picture that I had up the other day, Sassafras and Bee.  But just the flowers and bee.  It's much more than I need, but I thought that showing you that all you really need to do to capture what is on your screen is to hit Shift plus PrtSc - Shift and Print Screen.  On my particular keyboard, that is actually Function (or Fn) plus F11.  PrtSc isn't exactly used a lot, so when Dell put this laptop together, they de-emphasized it so you're not always hitting weird key combos and wondering why you aren't getting your intended results.

In short - Your Mileage May Vary, check your keyboard for the exact keystroke.

Now that view of your desktop is inside your clipboard.  Open a new copy of Irfan View.   Paste the clipboard into the program by either selecting Edit and Paste or just do Ctrl and V at the same time.  You could just have opened the file directly, but that would have been easier.  It also would not have answered the question someone else had asked - how do you copy your screen into a picture.

There, two questions answered with one stone.

At this point, Irfan View has your picture so simply Anchor your cursor on the beginning of the spot you want.  I clicked on that spot and held the mouse button down and dragged the mouse cursor until I had roughly the area I wanted.   I was looking for a view to fit on my tablet, which is 1024 by 600.  Since that can be difficult enough to be impossible, I simply got roughly in the area of the size I wanted.   If you look at that picture, you can see a faint rectangle around the flowers.   That rectangle can be dragged with the mouse.  Hover over the line and the cursor will change to a double headed arrow.  Click and Hold the mouse at that point and then move the mouse slowly to expand or shrink your rectangle. 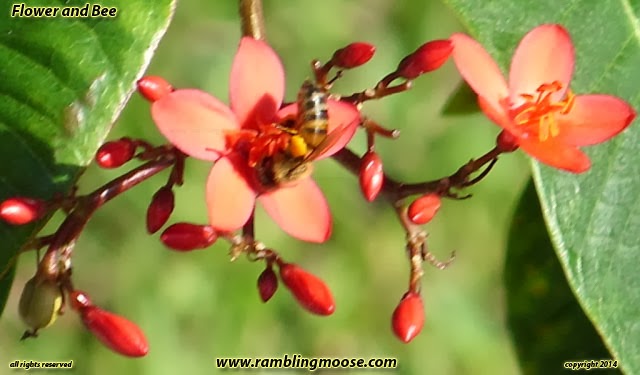 It really is that easy.

Then repeat for the other sides until you get exactly what you want.

Now open another copy of Irfan View.   Paste the clipboard into the new copy by hitting Ctrl and V.  Yes, it is that easy, you will have just the flowers and bee now.  Keyboard shortcuts are called shortcuts because they save the effort of using the mouse to get up to the commands in the top of the window.   Quicker for me at any rate, you may not agree.

The end result can now go on my tablet, although to see it right I would have to tilt my head to the right.  The picture works for that, since it is "just me" and I'm not going to be too fussy on there.  The problem is that the camera gets fuzzy and blocky when you zoom in.  That's a common problem with photography, but it is what you end up having to do when you don't have a proper Macro Zoom lens for your little point and shoot camera.

After all of that you can bring it into Photoshop, GIMP, or Inkscape and add a little text or adjust some of the colors.  All a part of that Post Production thing I was talking about.

That is exactly how I go about putting a picture together for the blog when I post one.
Posted by Bill at 9:45 AM