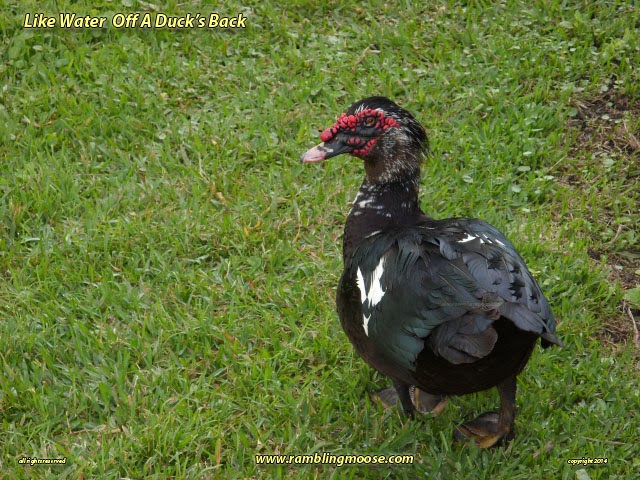 I'm used to seeing oddball things early in the morning.

It didn't surprise me when I got the evil eye from a Muscovy Duck.

I wasn't concerned when I got the hiss and waddle from same.

I was a bit surprised when I practically stepped on the creature when I stepped out onto my front porch.

We share the land with a lot of wildlife.  A Lot More than I had Up North.  There, I'd get an occasional moth or those blasted annoying mosquitoes that would follow me everywhere.  Lettie would eat any house fly that got near her.

But that was about it.

Clouds of Mosquitoes would bang their senseless heads senselessly against the kitchen window when I went to roast coffee.

Moths would flutter across the TV Screen.  That was special when I was watching Avatar on 3D Bluray the other time.  I didn't know if I was swatting at something on the TV or something in the room.

We've had a black racer snake try to colonize my Florida Room.  I guess it enjoyed shelter and warm spaces as much as I did.   Towel and open door showed it the way to go.  A different one was out in the garden sunning itself after feeding on a tasty mouse.

At least I assume it was tasty.  I'm not in the habit of eating rodents, raw or otherwise.

We get large flocks of noisy parrots that screech by at The Time To Flock, twice a day.  They also have come to visit my Oscar from time to time.  They squawk at him, he yells hello back through the windows.

Opossums and Raccoons have both used my pool equipment area as a highway to whatever business they need to conduct on the other side.

These ducks are all over the place.  They're a bit goofy, waddling along and hissing if they think you are too close.   They're mostly tame, you really can get close enough to touch if you are patient.

Don't do that, they are better left alone.

I just did not expect it literally on my front step when I stepped out.  Rack didn't care.  They don't really register as something to herd with him, just a lean in and sniff.   I did use him to herd the ducks out of the street one day when a car was stuck in traffic as momma duck and her little ducklings were in a line.

Handy to have a herding dog around when you need one.

So if you come by, check the window on the top of the door.  You may just have to move the wildlife along so you can get outside.

Or just borrow the dog.  He could use the mental stimulation.
Posted by Bill at 9:33 AM