Rack Vs The Stair Tower

Actually it was time to go to a friend's office to reboot a server.  Something got confused.  It's Microsoft Windows Server and I suspect it just had a headache.   That and he needed to see if a key arrived in the mail. 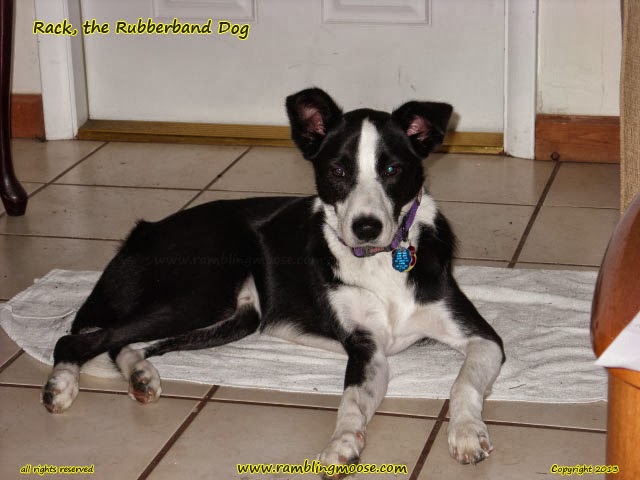 I was bored, sitting around will do that.  So when he asked me if I wanted to go there, I suggested to take Rack with us.

When we got there, I was told that the elevator was shot so we'd be taking the stairs.

Stairs?  With a fearful dog who may have never seen stairs before in his life?  Other than the one step we have to get to the slab the house is built on, there are two steps in this house.  One in the front, one in the back.

If you have a house in Florida, and you have steps, it's not "down" it's "up".  Down means flooded basement or some goofball from Up North wanted something familiar.  You want a split level?  Let me suggest Cherry Hill, NJ.  Beautiful suburban city, I'd love to move back if I had to go up North, but no way.  Chock full of Split Levels and Basements and steps to tire your dog out.

I used to send my dog upstairs looking for the ball just to tire her out when we lived in Philly.  If you have a herding dog and she's acting bored, I suggest the stairs trick.

The entire trip there, Rack was transfixed.  We drove past the bars and restaurants on A1A on The Strip in Fort Lauderdale.  Blinky lights, booming music, and a party atmosphere will get a dog going too.  My little guy was panting in excitement making wet spots on the window with his nose.  I guess it's been too long since he's had a Ride! In! The! Car!

We pulled into the garage and parked near the door.  Parking lot was empty and it was quiet as a tomb.

Getting Rack out of the car, never really a problem.

Walking to the door, Rack understood to wait.  He's getting good at that.  He knows if he doesn't understand, sit.

We opened the door and stepped inside.  Rack followed.

This was when he went into "Woahdude" Mode.   Rack gets overwhelmed and puts on his "stoner" look of wide eyed excitement.  Then we started walking up the stairs.  Rack didn't understand he was going to follow until I got to the end of the leash.

He put a paw, tentatively, on the first step.

I don't think I ever saw a dog move so fast.

Skittering up the steps, he got to where I was in about a half of a second and sat down.

My brain reacted and I finished the flight up to the landing.

Really, I didn't think I was going to be walking up a fire tower with Jeff Spicoli from Fast Times at Ridgemont High, but ... coooool!

Second flight.  A lot less tentative.  This boy picks things up FAST.  Then again, he's a McNab.  If you can't train a McNab, you don't need a dog.

We walked up the stairs, him still looking around unfamiliar surroundings of grey unpainted concrete and climbing in fits and starts.

Made it to the landing at the third floor.  One more floor, two landings.

By the time we made it to the fourth floor, Rack was where he belonged, right at my left calf matching my speed.

Getting the door opened to the office suite, Mr Dog was wandering through the hallways looking completely confused but dealing with it.

We got into the Executive suite and I parked on the aeron chair.  We'll wait here, go reboot the server.

No keys unfortunately, but we were good.   It was time to leave.

Instead of going back down to the second floor level of the garage with Mr Dog, we'd take the elevator.  Walking down the stairs was one thing we'll save for another day.

Getting to the lobby was not a problem, Rack's excellent when he knows where we were going.  He seemed to figure it out, although I'm sure I was telegraphing our moves.

We pressed the button for the lift and had another Woahdude Moment.  The relays and hydraulics clicked and whooshed and confused the little guy.  He plastered himself to the floor, sitting up by the time the closet sized room arrived.

He was the last one in.  Yes, come on boy the doors are *thump* closing.   Well, that moved him along!

The doors closed on us and we surged toward the ground.

We were magically transported to another realm.  The realm of the First Floor!

In the mind of a small fearful dog, this was complete magic.  Walk into a room, doors magically close, noises and vibration happen, then the door opened and we weren't where we were!   Woahdude!

Stepping into the night air we were a floor below the car.   We'd have to climb the stair tower to the second floor, but at this point, Rack had no problem.   He was climbing that noisy tower like a champ.

A lot of mental stimulation for a dog.  That is how you keep an active breed content, keep them mentally challenged with lots of complex tasks.  If you don't have a herd of sheep or cows handy, borrow a stair tower.  You both could use the exercise.

When we got back to the car, I can't say I ever saw a dog fly into a car faster than he did when the back door opened to the big SUV.

The rest of the ride home, past the bars, past the restaurants, past the tourists?  Nothing.  He lay on the back seat plastered to it processing all that "new".   He was challenged and succeeded.   Rack has learned a new skill and got past some more of that fear that he's had since he came into our life 10 months ago.

One paw in front of another, boy, you're doing fine, you're going to make it.   If you could just be a little less intense when I have my yogurt, though, I'd appreciate that.