Avoiding Strange People at 5AM in a Tourist Town is Important 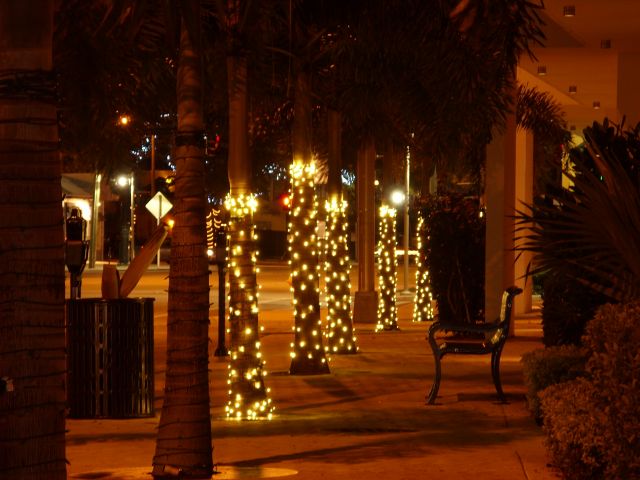 At Five in the Morning, Wilton Drive usually looks like this.

I'm up at five every day.  My body just does.  It started when I was competing on inline skates, the early hour gave me time to get to Fairmount Park in Philadelphia so I could get in a good workout before sunrise.

It still gets up at five now.  This particular morning my mind was reviewing Accounting practices.

Yes, that was my mind at 4:30AM.  In a loop as I came into full consciousness.

I got out of bed at 5, hauled my own bulk out to walk Rack, and was out on Wilton Drive by 5:15AM.  It looked like that picture.  Deserted.  Not even the delivery trucks were out.

Then I got near City Hall and heard someone say hello, a couple times.  I said hello once and got Rack off Wilton Drive, and around a corner.  I'm good at reading people.  You get that way when you worked in the middle of the Badlands in Philadelphia for 8 years.

Wilton Manors is a "tourist town".  Our population surges just like every other touristy place, we see many more people in town on a Friday Night than on a very early Tuesday Morning, which is when I am writing this.  It's a way before dawn as of this point.

Yes, I'm writing this to get it off my mind.

This person, Dave he called himself, said "Hey! It's my birthday!" as he weaved almost falling onto Wilton Drive itself.  The empty drinks party bottle may have weighed him down on one side.

I have also said that: "The problems that we have here are mostly due to "outsiders" coming "Onto the Island" and stirring things up."  Our crime blotter is mostly filled with people from Fort Lauderdale, Oakland Park, adjoining cities plus the oddball from some place like Ohio or the big cities Up North doing something "Creative" with someone's lawn ornament.

I'm thinking this guy was walking up from Fort Lauderdale, drunk, after celebrating his birthday.  I've seen him lurking around town before.

Lurking is a good descriptive word, I'd say.

I wasn't quite fast enough changing my route to get away from him.  I made a couple turns designed to disappear from sight, but Rack paused to water some plants.

He caught up to me and insisted on introducing himself and giving me information about himself.  I made brief happy talk of nothing really substantial - the code for "Move on, Pal, and sleep it off".

Like I said, they come onto the island from out of town to try to cause a ruckus.

I suspect if I were a smaller person, he would have been more aggressive.  I'm 6'4" and 220 pounds, built fairly solid.  Better shape than the average man my age.  This guy was around 5'8" since his head didn't really go past my shoulder and lean, but definitely not handling himself well.

I was clearly mentally doing a threat assessment at this point.  I turned on the flashlight at something to make sure there was enough charge to fire off the taser if I needed it.  It's useful in clearing out pests like badly behaved dogs owners.

He kept up the patter as I walked around the block and headed generically towards home.

It also was the time of morning that I knew certain people would be getting up and out.  My neighbor Jim was taking his two Samoyeds out for a walk at that time.  I managed to get Rack to sit down so that Jim would make it a point to stay longer.  He looked at my dog and I mouthed "HELP" soundlessly.  He didn't take the hint and moved on.

Well, that didn't work, and the patter kept on.  I kept responding to lower his expectations.  I didn't appreciate the company at all.

Another neighbor was heading to the Gym.  Bob saw this guy and did the "I'm not looking stare" and it really looked like him thinking "You can take care of yourself".

I can.  My own problem is that I'm too nice of a guy.  I did start making comments like "Come on, Rack, time to get home and wash off your feet, I need my coffee".

He made his plea coming up to the corner of my block.  I cut him off.

"Sorry, can't help you, I don't have any cash with me.  Nobody brings cash with them when they walk dogs at this hour."

Ten bucks?  Get lost.  Inflation hits hard, it used to be "Spare a dollar?"

He wandered off with a few four letter words.  I guess the alcohol that he was "sweating off" didn't hinder his vocabulary.

Fat Tuesday's drinks don't work well as a cologne at all.

My hand relaxed off the taser's red deployment button and I moved quickly home.  Before I turned down the walk, I turned to notice he was well gone.  I left the blinds closed when I got inside the darkened house.

While I knew I was safe from harm, I had a dog who was highly aware of any sort of strange activity and he was watching closely the goings on, I did not relax.  He clearly had no room in his T-Shirt and board shorts to fit a weapon, that was obvious even in the sodium orange lights that are used here.

I'll make it a point to be a bit forceful in the future.  It's one thing to be a nice guy, it's another to have to deal with a drunk coming in from Fort Lauderdale looking to buy his next bottle on your ten dollar bill.

I guess I really should add "Crisis Management Expert" to my resume!  If not that, maybe "Alcohol Abuse Counselor"?

Believe it or not, I'm not really bothered by the incident, more annoyed.  It was a disruption to my normal morning routine, and a very rare one.  I'll just make sure it doesn't happen again.
Posted by Bill at 9:42 AM