Confuse Yourself With A White Mailbox

We moved into the house 10 years ago, roughly.

Since we have been here, we've fixed things.  Other things we haven't really paid too much attention to.  It works, it may not be perfect but it is "Serviceable".   If it broke we could probably fix it, or replace it, or something else that would come to pass.

The mailbox was one of those things. 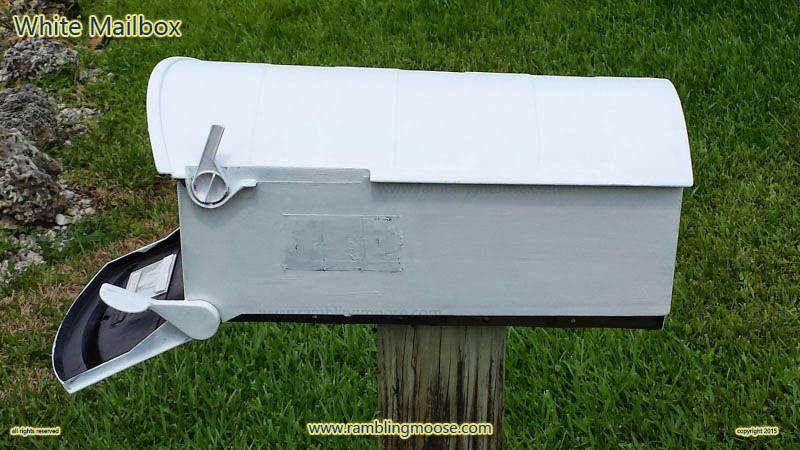 You don't often give a mailbox much thought.  The postie comes by, drops something in.  If you're home you say hello to Postman Pat, get your daily mail, then wander back to the house with a stop by the recycling bin.

I don't mind getting "Junk Mail" since it's keeping the US Postal Service in business.

The same can be said for my house that I grew up in, in the sainted land of New Jersey.  Cherry Hill, NJ.

We replaced it once.  I can't remember why, but it was there.  Doing its job, day in and day out.

We'd had a discussion here lately about how the old box was getting to look a bit odd.  Tatty.  Dirty actually.

Off at the local big box store, we'd started looking at new ones.  That was started because some drunk came down our street one night and drove over the post holding the old one up.  I picked up the old post and box off the ground, we pulled the concrete slug holding the thing in until that day, and slid the old post back in the hole.

Simple and elegant.  Ok, so sure, the mailbox is lower now.  I have to bend down lower to see what's in there, but it works.

The flag on the West Side of the box snapped off in the process and has been mulched by the lawnmower.  Long gone, I'd say.

When we were looking at shiny new boxes we realized we'd need a new post and would have to get all of that at once.

That happened a couple times and finally I got annoyed at the process.   Waiting for the right day, when nobody was there to say otherwise, I attacked the old box.

Early in the morning there was a complex series of events.  Naturally, I'm a bit complex myself.  The bottle of cleaning solution exploded under the sink due to a freak weather front coming through and making my ears pop all day.  I had to clean up all that blue fluid and got A Bright Idea.

I went out to the front yard with the scrubbing pad that was sodden with cleaning solution and scrubbed the old box to a nice charcoal grey.  You know, what your black T Shirt gets to look like when it's too comfortable to toss out, but no longer black?

That's the box.  I scrubbed all the rust off the thing and it was a uniform color.  Quite impressed I mentioned that we had a New To Us mailbox and walked back inside.

Until the next day.

Bright idea time.  I remembered I had the tail end of some Primer White Exterior Flat Latex Paint.  That's what it called itself.

I walked outside in the heat of the day and proceeded to make myself flash blind.  White Paint on a midday sunshiny day will make you walk into a door frame when you go back indoors, so be careful.

Not so bright that in two hours later I went back outside and gave the old box another coat of white.

Yes, I painted over the numbers.  We need new numbers.  The old ones were stuck to the side of the box and the new ones will be stuck over top of that just like those annoying registration stickers that have no purpose on your license plate.

Don't get me started on that one.  Those stickers make no sense except where they actually put the license plate number on them.  But basically it's there to keep someone in the state capitol employed.  Make Work Project my father would call it and I agree.

Walking back into the house, I called it done as I banged my left shoulder on the door frame.  The job was fine - good enough.  Paint brushes clean.

But the thing is I nudged the apple cart and a few golden delicious fell off the other side.

In my living room are two green chairs.  Mine sits close to the front window.  That's how I like it.  It's a little warmer than the other, but I can see out the window and watch the sunset.  Every night that I am sitting there, I get to watch the sunset over top of the Shoppes and the palm trees.  I always notice.  Unfortunately some days it notices me and shines right into my eyes in brilliant subtropical laser beams.  But lately it has just been pleasant.

While the old mailbox was black and unobtrusive, Zinc Oxide Primer White Exterior Flat Paint is brilliant in the Florida Sun.

While I ignored the old mailbox before, now it shined in my eye like a beacon.

It was a very bright weekend.

We watched some old sitcoms, a couple movies, and generally enjoyed domesticity when I commented.

"Now that it's white, I keep looking at the damn thing!"
What's that?
The Mailbox!  It keeps catching my eye!
Don't worry about that, the sprinklers will dye it rust.
We need new paint.  I want some old school Barn Door Red High Gloss Paint!
Yep!  You're at it again!  You're making more work for yourself.  Do you think it will hide the rust?
Better than the white will, I'll have to paint the box over in a month if its left white.

And so it goes.   So if you want to confuse yourself, change something that you never see into something that is brilliantly in your face.  It should give you at least one conversation.

I've heard more than once from the neighbors that I should "DO something with it and be Creative!".  One suggested rainbow colors, another was talking about fire engine red.  Safety Yellow might be an interesting suggestion, but I'm thinking Barn Door Red.

That should be close enough to the rust stains on the house.  Yeah, Barn Door Red!  Get the keys, we need to go to the paint store!
Posted by Bill at 10:07 AM