Rack Says, Slow Down, The Lights Are Changing! 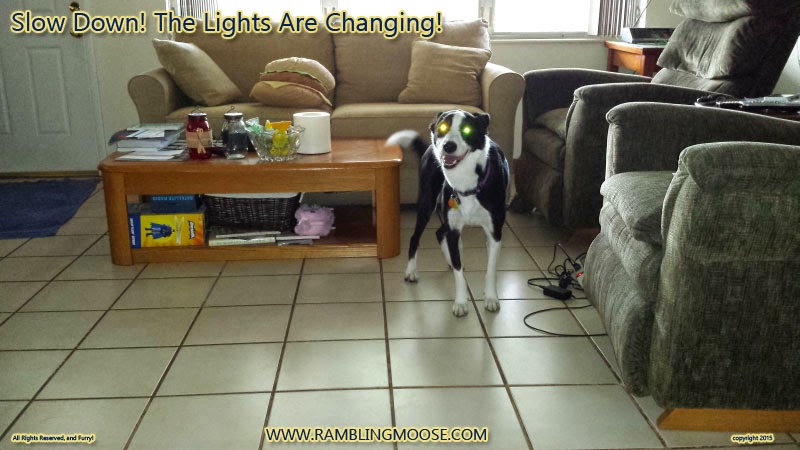 I'm waiting for someone to get home.  It's time for the dog walk.

Me and my Faithful Sidekick, Rack the McNab SuperDog (TM) had already been out to the backyard.

We went out through the double doors, walked out into the sunlight, and greeted the afternoon by peeing on it.

There are a few oddball herbs in the garden.  The Basil that I finally got the right pot to grow is right at dog nose level.  It's in a white ceramic pot that sits on the irrigation drip-feed.  Rack walked right over to it and caught a scent.  Sniffed it and ...

"Had a nice sneezing fit did you, dog?"

He smiled at me in that content way that dogs have when they were caught doing something dumb.

I got this thought placed in my head like an induced memory "If I smile like this, he won't tease me for being dumb, he'll think it's cute and smile!"

Yep.  However I got that thought, it was right.  I laughed.

Rack took off.  Ran off around the big palm tree, leapt over the spa, then sniffed the mint again.  He seems to do that at odd times.

At that point Rack bent space-time.  Einstein would be amazed.  His matter blurred in our own place when he launched into motion.  The air behind him cracked as he first broke through the sound barrier, then approached C, the speed of light.

Interesting, boy, you usually save your inter-dimensional travel for behind the shed.  His black and grey blur ran past the back end of the pool, over the stone fountain that hasn't worked since the early part of the century, then curled around the Sea Grape tree.

Leaves were pulled out of our dimension as Rack roared past.  He was now out of sight, bending distance as he ran.  The turf showed where he had been as all the sudden the world went quiet.  SuperDog was visiting his SuperDog family in the Dog Universe that is on the other side of the Wormhole that resides in my backyard, behind the shed.

After a gap of a few seconds, white caps formed on the pool.  The usually placid waters rocked due to a vibration, a Change In The Force.  I heard a dull rumble.  Rack was reentering our plane of existence.  Wind rustled the Hibiscus and the Coleus near the big Sea Grape tree as a black and white blur dropped out of Warp into my yard, and continued to decelerate down below the speed of sound.  He did a figure eight around the Bougainvillea picking up brilliant magenta blossoms into his wake, then once around the big palm tree.  He was down around the speed limit for the neighborhood as he hurled himself over the spa, and slowed to a brake near my back door.

Rack looked back at me and wagged his tail as if to say "Get a move on it, you need to come inside.  The mosquitoes are catching up to you!"

He got his drink then walked over to the big green chair.

His eyes began to change from his usual glowing robotic green to yellow from left to right.  Smiling, we knew all was right with him and his dog family in the canine universe on the other side of the wormhole from my little shed.

"Ok, Rack, we'll go for a walk soon.  Have a rest, it was a long trip to get back here from the other realm."

One more implanted thought appeared glowing on my cerebellum.  "Thanks, it was fun visiting the folks.  My kingdom is safe.".

"Rack, sometimes I wonder what goes on inside that furry little head of yours!"
Posted by Bill at 9:46 AM