Lizards in the Bougainvillea 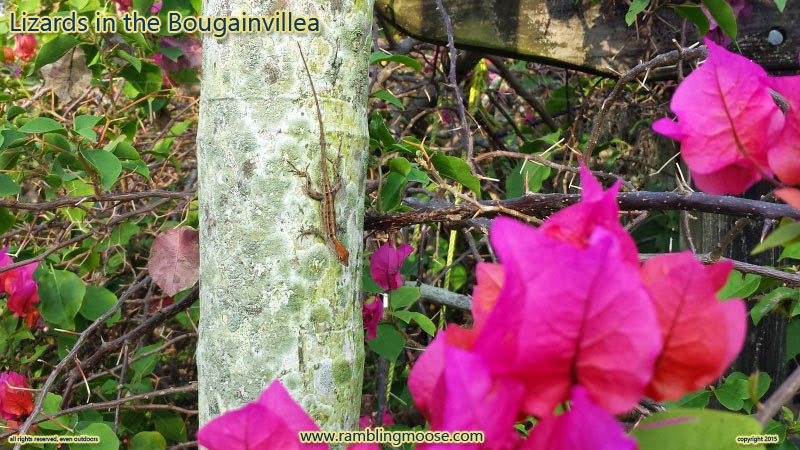 Every morning, after breakfast, it's time for a wander out back.  I am never alone.  Usually by that time, Rack the SuperDog (TM) is ready for his final excursion of the morning.  He will have a full day of resting, napping, and generally watching me do my own thing until Lunch time when he tries for a morsel or two as a snack.

He usually gets some, I'm a soft touch.

Or so I have been told.

We will generally inspect the area.  He has his perimeter search and if there aren't any dreaded trash trucks in the neighborhood, he may even decide that he wants to romp a bit.

If not, I entertain myself with what goes on in the yard.  There are always gardening chores to look into.  The cutting pots must be watered.  Orchids will have to be looked after.  The Staghorn ferns probably have had their Spanish Moss tossed out of them and need to be picked up and set right.

Generally it's a Quiet Before The Storm time of day.  The neighbors aren't usually rattling around, that's my job.  I'm the one up at stupid hours, so early that even Oscar the parrot goes back to sleep when I settle in.  Going outside is a chance to think about what needs to be done, and set out a plan for the day.

All the while I am being watched.

My friends that live back there, the lizards, watch over me.  Sometimes they're watching to avoid, other times they're actively looking for my attention.  Completely harmless, quite beneficial, and normally entertaining.

I honestly think that I live in their house and they graciously allow me to remain here, at times.

But there they will be at that hour, recharging their solar batteries.  You would think that they are easy pickings out in the open like that, but I have never seen them molested.  I guess a creature smaller than your finger wouldn't be worth the chase to a larger bird.

They will hang there eating the ants off my palm tree that grew too close to the house.  The tree itself is on borrowed time since it's a hazard in a hurricane, but for now it will remain.  Its replacement was planted in the island in front of the house a year ago and is growing quite well, but this tree with the moss on the North Side will not remain in the long run.

Meanwhile, it provides an environment for my little Cuban Brown friends to hang upside down and dine and pose for the paparazzi that live there with them among the flowers.

As long as I don't get too close, I may even be able to enjoy a little time with them as well.  Even if this one leaves, there will be another one to take its place.  Too good a spot to pass up.
Posted by Bill at 9:42 AM