Rack, It's Great You're Finding Your Voice, But Please, Not At 5AM

When I was competing and training on inline skates, I'd get up early enough to get to Fairmount Park in Philadelphia to go do a quick 30 miles.  Many times then I'd be up early enough, even in Summer when the days are longer, to watch the sun come up over Philadelphia.  I would watch the sun painting the Art Museum and Boathouse Row in tones of Gold and Brass, burnishing this one place of beauty in a way that most people will never get to see.

They're groaning in bed wondering if they can sneak in another 10 minutes of sleep and rolling over to pull the covers in place one last time.

I'm fine with that.  I enjoyed my runner's high.  It would start in April and end some time in November when I had to go back to once or twice a week workouts or when the Fall rains would wash out the trails.

Even to this day, I still get up at Stupid O'Clock.  That's 5AM to you and yours.

This means that Rack, my faithful sidekick, the McNab Superdog gets up too. 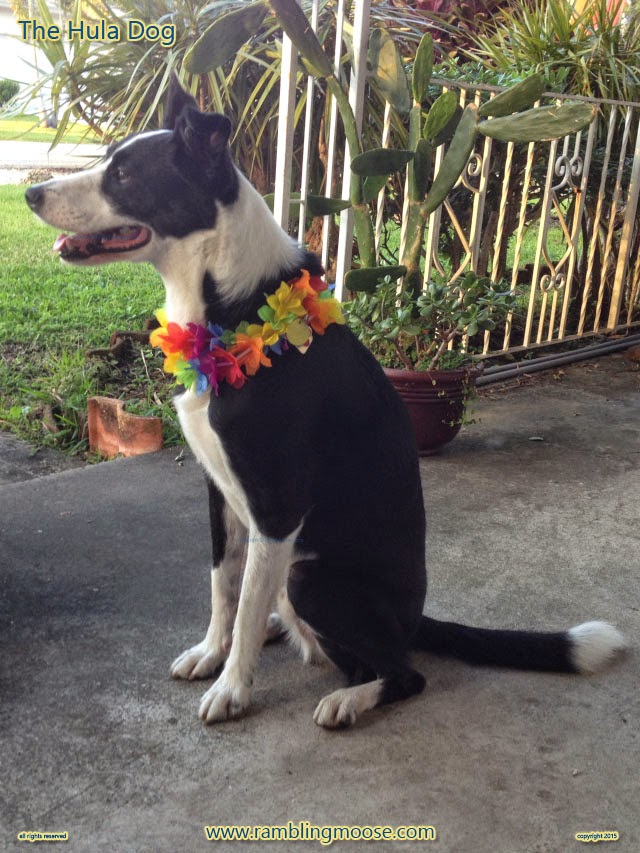 He's not quite as much of a morning person as I am.  Half of the time when I am out in the kitchen refilling his water bowl, he's gone into his crate to press the virtual snooze alarm with his left paw.  He'll get about a wink and a half before I suit him up to go out into the predawn darkness.

While I am awake, it doesn't mean I'm fully awake.  I'm usually muttering my own internal monologue to anyone who would listen about the day's plans.  That means I'm telling Rack to Go Poop, and "It's just the 50 bus, relax!".

We wander through our quirky little island looking in shop windows on Wilton Drive and thinking about whether I should go one route or the other.

This particular morning, early in the morning and early in the week, I decided that Rack needed exercise.  He wasn't nervous this day, or not as much as usual, and the leash was slack.  I can tell when he's hating the whole business of being in the middle of the bustle of life because the leash is tight, and I'm being towed by a purple strap attached to my wrist while Cars, Truck, and Trains are roaring past.

I can always drop the leash, he will simply circle back and glue himself to my legs.  It's what we do.  He knows he's safe with me.

Having gone through the majority of the Central Business District of Wilton Manors, Florida, that great metropolis of the South, we were on the home stretch.  One more long double block and then a turn back into the neighborhoods of the city to get him back for important things like breakfast for both of us and a well needed mug of coffee for me.

Off in the distance I spot someone jogging.  That's normal here.  Jog before sunrise in a warm climate, your hydration levels will thank you.

As the jogger got closer I realized first that it was a she, then that it was a she that I know and like very much.  I don't see Danielle as often as I would like, our lives rotating on different cogs of the social life of the city.  When we do see each other, it's a great homecoming greeting of warmth and friendship.

Danielle decided a while back that she'd start working out and getting in better shape.  Her friends, myself included, gave her words of encouragement and wished her all our best.

It worked.  Danielle looks amazing.  The pounds melted away, she looks lean and young, healthy and vibrant.

None of this meant anything to Rack.  Here came someone who he didn't really know.   He's nervous around people to begin with until he gets to know you well, then he's excited in the way that only a McNab can be.

He'll vault off the ground in leaps as high as 5 feet or more in the air, all the while making little happy yips and other noises of joy.

Not this time.  He went into his submissive fear posture.  I said hi to Danielle as she did the same.  My arms opened wide and we hugged like two long lost friends, right there, square in the middle of Wilton Drive.

Well, not exactly in the middle, more like on the sidewalk.  After all, there isn't much traffic at 5AM but there are a few cars, and that blasted 50 bus.

Rack did not like this at all.  Apparently, my Weak Beta Dog had some strength in him.  Instead of cowering in fear as Danielle and I hugged, Rack began to grumble, then to "moof" at us.

Rack didn't.  He fired off a few more moofs and something close to a proper bark.  I was His to watch over, and he didn't like this person, whether she was the personification of sweetness or not, so close to me.

We let Rack have his mood.  "I am surprised, he usually doesn't bark.  He's finding his voice but I wish he wouldn't find it this early in the morning and read things a little better.  Silly Mutt!".

Going back to our human conversation, we continued to get the stink-eye from my dog.  Strange as it was, he was doing his job.  We had to just accept it and channel his mood as much as we could.  After all, he's not a yapper, when he barks it is done with purpose.

Just not to Danielle.  Danielle is one of the sweetest women on the island.

Rack, you'll learn, but until then, come on, we've got some walking to do.