Hacking the Morning's Coffee at One Gram to the Ounce

Riding around town with a good friend I was told a story about office coffee. 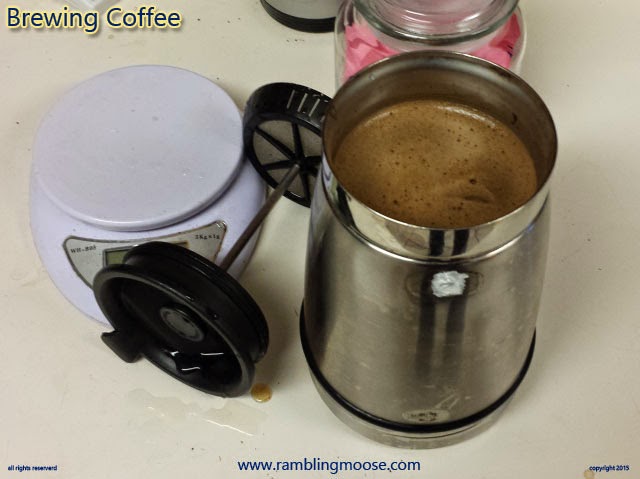 I hear "But some people are complaining it's weak!".

My response is out of the box as usual.  "The best hamburger is one you make at home, no matter how good that burger is out at the restaurant.".

At home, you control the ingredients.  Black Angus Beef?  80% lean?  Onion powder or other spices?  Egg for binders?  "Meat, Heat, and Eat"?

That last one is my favorite.  Add spices or salt to my burgers, and you had better have served beer BEFORE the meal so it hits me on an empty stomach and I relax a bit.

I hate a salty burger!

But the point is that if you take the time to make a burger yourself, you are controlling the meal and the experience.  You are taking the time out to figure out how you like the burger.  It may not even be a burger and be all "Meat Substitutes" made out of tofu and soy protein.  That's great, because it will be what YOU like.

That particular office has some people who love the coffee there, and sizable minority who are muttering about how weak it is.

"Maybe they're used to espresso at home?"

I explained that there is a gold standard for brewing American Coffee.  Assuming your water is pure, which is a given in the US even from the tap here in South Florida, and your coffee is something that you like, there is a set amount of grounds to start out with.

One gram of coffee grounds per ounce of boiling water into a brew.

You already decided "how" you will be making your coffee, and that choice effects flavor.  A French Press is my preferred method, and that means I will get more coffee oil in the cup.  That also means my cup will be more complex than someone who does a "drip into Filter" method.

Turkish coffees are boiled in a little bucket that are placed on the heat and then poured off carefully but some grounds always get into the cup along with some of the spices and all of that precious coffee oil.

Espresso has the oil too, and it is brewed via pressure with much less water to coffee grounds.

The point with that is that there are different ways to make the coffee, but here in the US, you expect a certain strength at the start.

Then you change things around per taste.

I explained that these people are probably the ones who consider themselves Connoisseurs of coffee.  They may come from a background with a tradition of a certain taste of the brew.

They would be the person who I would expect to put care into the drink.  They've got their own way of doing things that work for them.

The whole Office Coffee experience is all about putting caffeine into a body so you can get more productivity out of them.  That's why offices keep coffee there.  Your manager decided it's a great way to keep you motivated at 2PM instead of your nodding off.

"Hey, go get him some coffee, he's half asleep!"

But the coffee itself?  Check the net weight of the grounds, and how much water are used.  It should be 1 gram to the ounce.

That got into another conversation.  I explained that I have a scale that is accurate to the gram, and while it sounds overkill, certain baking recipes (as opposed to cooking things like roasts and such) are very fussy.  Bread dough is effected by the humidity in the air, and since Florida has high humidity just like anywhere on the Seaboard of any country, that humidity changes the way you bake.  Same thing about desert climates, or living up a mountainside.

You just don't get a good rise of dough if your flour is too moist because there's a Tropical Storm a-brewin' outside and the A/C is down.

So good dough recipes are measured in percentages relating to the weight of the flour.  Flour is 100%, water is 80% or 60% depending on the purpose of the recipe.

Then you do the math for the other ingredients.  Weigh out 300 grams of flour, then calculate the weight of the water, then salt, yeast ... so forth.

I told my friend to bring a measuring cup and a scale to work and see what he could do.

Instead he gave me a couple coffee "samples" and asked me to weigh them.  11 Grams of Grounds per "pod".  He should start with 11 ounces of water.

Unless you're making Espresso, and that's an entirely different game.

It's one of those things that you never thought about.  But when you do think about it, there are more layers to that particular onion than you considered.

Pass me a couple of the Kona packets since you want my input.  I love a good cup of Kona...
Posted by Bill at 9:18 AM