Coffee By the Pool

I usually warn people when they come for a visit about this.  We have mosquitoes that will carry off a small car here.

If I know that we're going to be outside for any length of time, I will spray instant death into the hedges nearest where we'll be.  Barring a Simpsons Style Springfield Dome over the yard, that's about the best we can do. 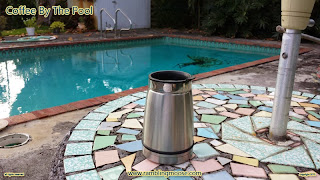 What we were doing for a while was when we'd be in the pool is to turn on the big noisy fan.  It would be pointed at the seats in the shallow end where you could safely sit in the breezes.  It also had a side benefit of being cooling.  While things here aren't as hot as the big Northeast Cities are in Summer, it gets hot here, and the sun being almost directly overhead at noon can be a bit intense.

For some reason, this particular morning they were conspicuously absent.

My own routine is to take Rack out back after breakfast.  Give him one last chance at the trees before it's time to get busy with things.  After that, he will spend most of the day dozing in the crate in the house until dinner.

Or as we know it, the Evening Mooching Hour.

I walked to the backdoor, looked back at him in the crate and asked "Do you want to go out back?".
The answer "Duh" seemed to be appropriate as he trotted to the door waiting for me to leave.

I normally wander around the yard inspecting the cuttings that I have out there.  I'm growing far too many cuttings for the yard in the "irrigation chain" at any given moment.  The result is that instead of having pretty flowers, the pots all have a bit of a "He's Doing Something" air about them.  They also need tending.

The morning poking and prodding of pots.  Except it was not really needed.

That particular morning, it just didn't feel right to do that, or to go back in since it was a bit earlier than normal.

Rack was done, and hovering at the backdoor already wanting to be in.  I was being preoccupied with the hedges and perhaps a little passive-aggressive.  "I'm not ready to go in, Boy." as I sat down at the chair by the table near the pool.

At that point, the noise level stopped.  The growl of the weedeater down the block was silenced and no train or traffic noise reached me there.  The only thing I heard were natural sounds.

The Rock Doves making their nasal "Mehhhh" sound.
A flock of parrots rushing overhead chattering on their way.
The rustle of the palm fronds on the utility easement as a scrawny squirrel walked a tightrope East into the Sun.

Still no mosquitoes.  Strange.  You get used to avoiding the girls and when they're not there, you take advantage of their absence.

It just was too nice a morning to go inside.  Rack padded over and looked up at me with big brown eyes.  We enjoyed the respite before the day got going in full swing.

Even the amaryllis that was late blooming back in April was enjoying the scene.  It was sending up a flower spike that may put out some red tipped white flowers within a week.

Now I know what my friends were telling me about that spot.  If you can use it, it's actually quite a nice place to get your own motor started and watch the day get up to speed.
Posted by Bill at 9:20 AM