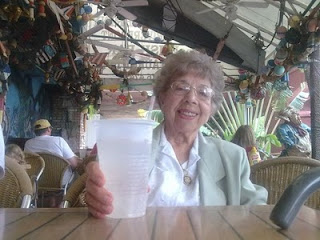 These days you get news differently.

I remember when Mom was alive, we had a hard and fast rule.  Stay off the phones after 9pm.   That was when the phone was reserved for important family business.

When she finally went, it was years before I relaxed.  Still to this day if the phone rings after 9pm, I jump.

That's how we found out that my Aunt Betty passed away.  She was a week before her 96th birthday so I guess you could say she went because of that.  "Being 96".

What you will never know is how powerful that woman was.  She was a character.  Put the three sisters together in a room and you were due to have a tornado of strength going on.  You knew where you stood with her, my mom, and my other Aunt Millie as a result.

Do something they didn't agree with, they would tell you.  You'd eventually realize they were right, and you'd eventually tell them so.  Its pretty much the way things were.

Betty would come down to her condo in Century Village for the coldest months and having her there, in easy reach, was a blessing.  It meant that I could come up for random visits.  Of course those places were gated communities so a "drop in" was always a planned event.

We'd go out for our favorite "bad Chinese" food, run a few errands, and do other things which generally meant enjoying each other's company.  She had made the transition from Matriarch to Good and Trusted Friend decades before, and that was great with both of us.

Once in a while, we'd get to discussing things in general and one of us would get onto food.  Our family was very food centered.  Visits to any of the houses meant these large productions centered around too much food, loud conversations, and the extended families meshing in the house.

I can still picture that oven of hers in the house in Woodhaven Queens stuffed with tray after tray of foods, the counters crammed with dishes yet to be cooked or cooling, and every square inch of that little kitchen stuffed with people rubbing elbows.   There would be a card game going on in the bedlam at some point, and she taught me how to play with the best of them.

"How about a game of Continental?" would be heard and we would settle in as the oven finally cooled well after dark.

But this time the food got moved.  I had gotten to talking about the roasts we made.  The beef was prime bottom round.  We did that up "Old School" in a roasting bag with vegetables and made up a Port Wine Gravy that was so good that I would freeze the stuff up and dole it out sparingly for months.  Every bit of that roast was used with care.  Other than slices for dinners and sandwiches, the bits and scraps and other detritus that fell off the thing would be made into Cornish Pasties, Pot Pies, and other specialties for weeks.

That was when I heard Betty say "Oh that sounds goooood!".  I knew she was hooked.  She had a certain tone to her voice which turned it into an unsaid question of "You are going to make that for us aren't you?".

We had to go to the liquor store and buy a bottle of Port.  That one, the one in the black bottle.

We got started using Port as a whim of mine.  It started with "Cheap Red Wine" as it said in the recipe, but we had run out, and the only thing remotely red was some horrible wine that was more vinegar than anything else and my cherished Port.  "Try it!" and it was good.  We never looked back.

The Port went in the roasting bag with onions, carrots, celery and potatoes.  If you never had roasted potatoes and carrots cooked in Port Wine, you are missing something truly wonderful.  The Port complements the carrots and enhances their sweetness and the potatoes are melt in your mouth good.

Can you tell we don't do this for just anyone?

Betty was looking out the window as she helped us get the roast into the oven.  We suggested a glass of Port by the pool.  She loved the idea and for every visit from that point on we gave her a generous glass of the stuff.  I broke out the bottle of the good stuff, the roast didn't need this.  This was a bottle of vintage port from a California vintner that after we got the bottle at discount learned that it was selling for over $250 a bottle.  Stock up!

Smooth as silk, it's called "The Ruby Relaxer" by butlers everywhere and this was some of the best. 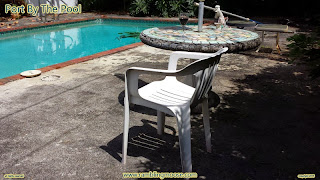 She settled in on the side of the pool, breathed in the jasmine scented air, and sipped the glass of red warmth in pleasure.

Yes, she said it like that: "Bee You Tee Full!".  Her first language was Italian, and she learned English before hitting elementary school, but if you listened closely, there was the tiniest hint of it still decades later.

But she was right.  It was bee you tee full.  We sat outside under the umbrella, getting up occasionally to check in on the roast.

One point we were outside and heard a hum and a thump.  This being FPL territory and my having lived here for 9 years, I knew what happened.  There was a transformer nearby that blew.  Power was out and there was a roast sitting in the oven.

While I prefer a rare roast, this was still a wee bit early by thermometer but not much.  Maybe 15 minutes worth.  We closed the door on the oven and gave it that time.

Part of the preparation of this feast was that you remove the vegetables from the roasting bag, after removing the roast and let it "rest".  That allows the roast to have the internal temperatures equalize.  It's a good practice for any cut of meat when they're over an arbitrary thickness.  We placed the roast back in the oven although it was for all intents and purposes done at Medium Well instead of Well Done.

It was this meal that got me hooked on making this dish by temperature in the future.  I don't care for Well Done as much as most.

But how to make the gravy?  We weren't going to waste all that Port Wine and Beef Drippings and the onions that sweetened it.  The next step was to pour it all into a blender, smooth it out, and then reduce it on the burners on the grill in the backyard if we had to.

Power was still out but I had a flash.  "Hey, doesn't your car have a 110V outlet in the back from an inverter?"

Yes.  This meal was going to be finished by making the gravy in the trunk of a car.

"Back your car up to the carport, pop open the back!  We will make the gravy in the car!"

Betty was still out back.  She was unaware of the drama.

The car got moved in place, and I heard the blender fire up.  After a while the gravy was brought back inside.

On cue, we heard the power snap back on.  The oven had to be turned off, and we fired up all four burners under the roasting pan to quickly reduce the gravy.

True to form this was an amazing meal.  Betty enjoyed it so much that she asked to take some home with her for later.

"I'm glad you liked it.  Did you know what happened while you were out back?"

I told her the story and said "Yes, your gravy was made in the back end of a car!"

We all will definitely miss her.

When I got the news from her daughter, Darlene, I was floored.  I was expecting it.  Our birthdays are two weeks or so apart.  I thought something was up when I didn't get a birthday card from Betty.  The last one was waylaid since it went to the Fort Lauderdale P.O and then back to Long Island.  I was hoping it was something like this but I somehow knew it wasn't.

We heard that she was in a hospital, and that she was recovering from an illness.  Things were touch and go.  If anyone could beat "this" it was Betty.