Have you ever done something a little different?
Perhaps a little "Out There"?

And did it simply because it pleased you?

This is one of those things.

Actually this is one of those things, version 2.0 or perhaps 3.0. 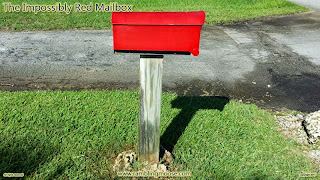 It was first the Impossibly White Mailbox.  Well actually, it was black, then it faded to charcoal, then it got cleaned and stayed charcoal.  It got painted Primer White, better known as that white nobody uses as their finishing coat except Grecian Islands like Santorini.

"But these islands are so beautiful, why don't we paint our house white with blue trim?"

Because you have to clean that white, that's why.

I got thinking.  It can be dangerous when I start Thinking.  Capital T Thinking.

Why stick with "regular" colors.  There aren't any regulations to it.  Why not be creative.  The house is this weird Broward county color.  Peach I'd describe it but that was after years of being in the sun and bleached and coated with stripes of rust due to the ground water in the irrigation here.

I'll get around to cleaning that.  I got the rust cleaning solution a while back...

Yeah, I got it in 2007, it's in the laundry waiting.  Procrastination is a bear.

I was thinking all this when a neighbor walked by and said "You should really try something wild and bright!"  He suggested every color in the rainbow then suggested a rainbow motif.

I'm creative, but that's a lot more complex than I'd prefer.

I smiled and took the suggestion and started banging it around.

Light colors fade quickly and will turn rust colored because the mailbox gets "watered" twice a week.  6AM Thursday and Sunday for 50 minutes I believe.

That won't work.  How about Barn Door Red?

We set out to the paint store looking for anything rust colored.   Actually we did that as an afterthought and came home with "Real Red".  Ok, it was a styrene paint that promised a shiny and hard seal.  Think of those 1940s era nail polish.  That bright.

I painted a coat of that.  Not so good.  It looked streaky and the paint had a nasty habit of drying before it left the brush.  It also attracted bugs.

Luckily I got most of them out of the La Brea Tar Pit that was the gummy paint and since the box itself was textured, they hid well in the goo.

I put down a couple coats but each time the stuff dried so fast that there were some nasty brush strokes.

Version 2.  I went out and literally peeled the paint off in sheets.  Like wallpaper.  There's bits of it still in the grass after it got mowed and hit with the weed eater.  Don't look too close.

I painted again.  More bugs since we're having an early wet season.  I painted over a mosquito in an inaccessible spot.  Nasty creatures those mosquitoes.

But the red looked good.  After a couple coats I stopped and sanded to get a good finish.

I'm waiting for a dry weekend.  We'll give it another coat.  Paint thinner was needed.   One last check before we left for the paint store again.

Damn, I like going to the shops.  Keeps me out of trouble.

So if you're coming by, just look for the Impossibly Red Mailbox.  Just like a candy apple or a fire engine.

Do they still eat those?

No, not the Fire Engines, Candy Apples!

The mailman likes it too.  He told us so.  Well, two out of three.  The third one was a little huffy.  "That's not traditional!"

"Neither are we, Ma'am, neither are we. But I do have one more coat to do when I get the chance."

Should look nice and garish with those gold numbers I have for the side!
Posted by Bill at 9:54 AM