Looking Out At The Everglades at 5 MPH 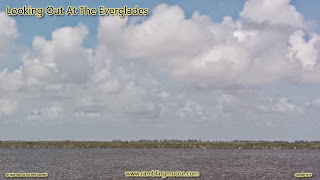 Of all of the activities that are available to people in an industrialized society, this is one of the more pointless ones.

We built a road through one of the most beautiful places in the world, the Everglades.  But true to form, it is not suitable to task so you end up sitting in traffic.

Actually, through all the years and the many trips, maybe even hundreds of trips, that I have taken to the Florida Keys, this was the first time I had been stopped in traffic at this particular spot.

By "this particular spot" I mean the 20 mile long corridor between the end of the mainland at the split for Card Sound Road in Florida City to the beginning of the Florida Keys at Key Largo.

You see, true to form, they widened the road.  But it is still just two lanes for the majority.  One lane up, one lane down.  Any traffic mishap and you're stuck until someone figures out a way to unstick it.  It used to be exactly one lane down and back.  It's a road built on an old railroad causeway after all.  Then it gained a shoulder because if it didn't have one you would have that same road blocked for hours.

The latest iteration was when the roadbed gained an actual barricade down the middle so that people falling asleep in the middle of the night don't drift over onto opposing traffic.  Improvements in drainage were made as well as the bridges were raised a bit.  This being Florida, they weren't allowed to say Global Warming or Climate Change because we have a state government infested with Republicans and other climate change deniers, but things were raised nonetheless - "Just Because".

However, the passing lanes were retained.

Instead of having two lanes down and two back, there are three separate Passing Zones.  Think of it as a place where the absolute best of driving habits come out to play.

Mom and Dad in their giant motor homes trailing a regular car behind them can't maintain the speed limit which is theoretically 55 MPH.  They collect quite a few people behind them.  When the road widens for the passing zone, everyone behind the motor home floors it and tries to pass.  When they all reach the end, everyone tries to merge in front of the motor home.  The motor home slows and creates a new tailback behind it.  Each time this happens it gets a little worse.  You end up with a 20 mile section of road that has a permanent traffic problem on the weekends and holidays.

You never want to drive to Key West on a Friday on a long weekend.

If it does happen to clear, it will happen again. Either a food truck, a motor home, or just some fool from the Midwest who is driving just a little too slow for everyone's liking will start it over.

My own personal favorite are those large trucks full of food going to refuel the restaurants.  The trucks are typically governed and under orders not to "maintain traffic speed", which is good and correct, but the cars stuck behind them will drive like fools anyway to get past them.

Since the entire road from Florida City to Key West is 125 miles, everyone everywhere tries to keep in front of those trucks.  All the food comes in on the same trucks.

So you end up checking the GPS for traffic information, see that the road is lined in red or dark red, and decide whether to head to the Keys or not.

When you get there and look out your window you see scenes of natural beauty unlike anywhere else.  You'll still be stuck, but it is still a beautiful scene.