Removing a Catheter is a Happy Dog Day 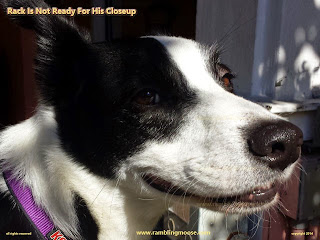 Rack needed to water the tree first, anyway.  After a day of being pumped full of fluids, he needed to pump them back out.  He also drank a full bowl of water.  That's 28 ounces according to the Fridge.

After going through sepsis from a dog bite, and spending the entire day in a crate, he seems to be back to his normal self.   Almost, anyway.  Standing up is still a little stiff, but the first walk this morning was done with him dragging me for a mile around town on his four legs instead of him doing the tripod hop on three.

I've still got a course of antibiotics to go through, and there is one last "exit" visit to the vet on Saturday Morning, but I think we're good.

But he's on the mend.

He even whined at another car on the way back.

That's a bit of a surprise.   You see there was a delivery truck near us too.  Rack has a strange habit around big trucks.  He tries to avoid them.  He avoids them by diving down behind the seat in the back and trying to make himself as small as possible.   Since I was sitting in the back with him taking up half the back of the four door Accord, it wasn't possible.  Instead, he whined at that truck, tried to dive under the blanket, then bailed and simply watched the truck from next to me.  All the while he was doing that, he was staring a hole through it from the seat.

But definitely on the mend, no matter what.
Posted by Bill at 10:46 AM