There are two kinds of people.  Those who eat them and those who don't. 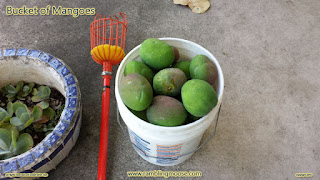 There's a tree in the neighborhood.  It's on the property of an apartment building.  We know the owner and he told me to go pick my fill whenever I want to.

Well "Woo Hoo!" I said and have been picking that tree for a couple years straight ever since.  He keeps elevating the tree, trimming the lower branches, and that does make it difficult.

With a Mango Tree, you do not want to do that.  The shape you should go for is an Umbrella - not very high but broad.  Why?  Keep the fruit as close to the ground as you can.  Since they can grow as large as two pounds a fruit, a solid Kilogram of sweetness, they can cause damage when they fall.

Imagine a melon falling from 32 feet in the air.  It takes a second to fall that distance.  21.9 MPH.  Imagine someone smacking you with an under ripe fruit at almost 22 Miles Per Hour.  An under ripe mango is about as hard as a rock...

In Mango Season I go out with our trusty orange fruit picker pole and pick what I can.  When I get a bucket, I over-pick for my needs and hand some out to the neighbors.  Usually I keep a couple extra "dog bags" in my pocket so I can grab them when they fall.  The fruit tend to roll out into the street and make an awful mess if they haven't bashed in a windshield or dented someone's head.

But I have been watching our neighborhood tree.  It has been a good fruit year and there's plenty more 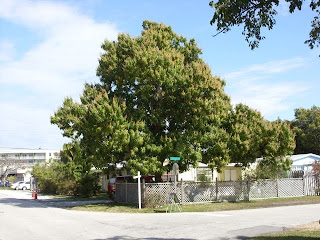 where that came from.  It's going to take a ladder to get the ones up above the 20 foot limit of my reach at this point.

I got out there, picked my fill, and picked another dozen for a neighbor.  That's where my own size got in the way.  The neighbor's house is right around the corner, so I dropped the bucket on my porch next to the planter and pole and walked on over.   Up the drive to the front door.  I was in luck, there was someone inside cleaning.

Tapping on the window I said "Hey, I'm leaving this for the family here, can you bring this in when you are ready?".

After all, the ants will get to a mango on the ground in 10 seconds flat, and it will be eaten away to nothing in a day.

I was greeted with a lot of yelling and hand gestures.  Ok, I can speak English, a bit of French, a tiny bit of Spanish, and a whole lot of Stupid.

As I started to turn and walk away, I draped the "t-shirt" bag on the doorknob.  "I'll just leave this here!"

More gesturing.  I don't think she can hear me.  She was yelling something in standard American English, I was wondering why she didn't just nod and smile.

"It's OK, I'll leave this for the family, bring it in when you can.  It's just a bag of Mangoes!"

More gesturing.  I spun to leave.

As it is, I'm a bit "top heavy".  High center of gravity.  I nearly fell off the porch.  At this point I realized it was either leave the fruit there and hope for the best or leave the porch and twist an ankle or worse.

Scratching my head in confusion I wandered down the drive.  The bag was left on the door until I was well out of sight.

That night I ran into one of the people there, Marc, and told him the story.   He laughed so loud that his dog looked up at him in some confusion, and my dog Rack dropped down to the ground.  I was told that the housekeeper was telling him about some giant guy that came by and left him some fruit but "She made a rather nice arrangement of them after all was said and done.".

So the moral of the story is that if you are going to spread the mango goodness, make sure it is jelly or jam.  Get a good recipe first.
Posted by Bill at 9:39 AM