Celebrating Craig's Birthday by the Sea 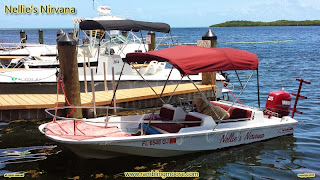 Actually it was drive 100 miles, get stuck in traffic for a solid hour at a walking pace, see some beautiful scenery, and finally end up slightly lost.

Yes, we had GPS.  But we had been there before.  We also knew where we were going, but like the saying goes "Not all who wander are lost".

While I'm dropping the old hackneyed sayings, sometimes the journey is the destination.

Plus I really do like going for a ride in the car.

Next time, we bring Rack, I promise.

You see, Craig came down.  He's a great friend.  We have known each other for years now, probably safe to say decades.  Knowing he's from up North, way up North actually, and had never been South of Orlando before, I had to get him to touch toes to the Keys.

I know of a great restaurant down there.  We all do if we go there enough, so I'll save its name.   Why am I not telling you?  Take me there and I will, but it was crowded enough.  It sits just on the South side of the key, on the water, in a cove.  Ok, so I have described about half of the restaurants in the Keys, from Key West to Key Largo and every place in between, haven't I?

You're looking at the view I had for lunch on Sunday.  I purposely put my arm on the railing, in the sun.  Just the right one.  I wanted a little bit of tan.   I can still see one arm darker than the other a couple days later, and I wasn't looking to sit on a beach.

We sat there, I had my Fish and Chips (Mahi Mahi, actually), and a bottle of some rather excellent beer, and some incredible conversation with Craig, Kevin, the waitress, and some of the surrounding tables.  There was, typical to the Keys, plenty of things to watch that were natural.  Just below us were some small fish, and a fish I kept calling a Grouper.  It could have been a Grouper, but might not have been.  That doesn't matter, it would have made a great meal for two from the size of it.

The children around us were thankfully well behaved, and I have no doubt that the waitress would have followed the instructions of the sign on the bar "Loose or Unattended Children will be fed to the Tarpon".

Keep your kids quiet, and at your table.  No matter how much you love them, others will find them annoying.

But we sat there taking in a 2 hour lunch watching the boats come in.  This was one of those places that while you're enjoying the jazz brunch, debating whether the singer is lip synching or not, and having fun telling R-Rated stories to the waitress, time goes on around you.  I'm not the kind of person who is used to sitting tight for a meal, I tend to be one of the first to finish and one of the first to want to leave.  But for once I was content to sit there and watch the little boats come by.

Lucky dogs on that one there.  There were two.  One stayed with the owners, the other got bored and went back to the boat and curled up under the shade.  I'm with the dog, it would have been a great place to kick your feet up and watch things go by, slowly, at the Keys pace.

Having finished our main course, the waitress brought Craig a slice of Key Lime pie, and another waitress and the Jazz Singer to sing him a happy birthday while he sat there under the umbrella, smiling away.

You have to admit, if you're going to take two hours to get to lunch, sit in a 20 mile backup, and have lunch by the water, this was a great way to do it.

So, Craig, if you're looking for something to do on your next birthday, I know a great restaurant, by the water, with an amazing waitress, good food, interesting lip syncing or singing (we're not completely sure), and an entertaining view.

We'd like to have you back.  Besides, it gives me an excuse to take a good friend to a jewel that I won't readily tell people where it is.
Posted by Bill at 9:33 AM