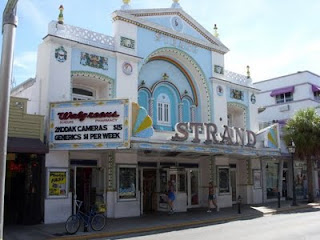 When Walgreens decided that Duval Street needed Yet Another Drug Store To Sell Plastic Crap and other necessities, they bought the Strand Movie Theatre.   This beautiful old building was going to be razed then a faceless building put up in Corporate style would be in its place.   Luckily the people there fought it, had it declared a Historic Place and forced Walgreens to step back and see what could be done.  If I remember the story right, the interior was pretty much trashed from years of neglect and misuse, so it had to be redone.

I was inside the place while in Key West, it looks like just about any other Walgreens anywhere else, although a bit smaller.   Chock full of souvenirs made in places like China made of plastic, towels made in places like China, and so forth.   But step outside and you have the beautiful facade still intact.   It would have been better if the original purpose of an old movie house were left there but if it has to be bought by a big corporation and a drug store put in, I guess this is about as good a compromise as you will get.