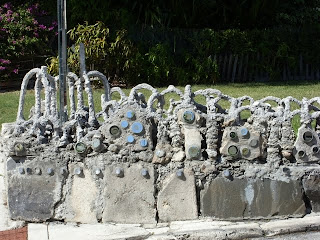 Key West has a reputation for being an art colony.   A place where you can put together all sorts of things in new and creative ways, take them down to the Business District on Duval Street, get into a Gallery and sell them.

Being from Philadelphia area originally, I'm used to Public Art.   Philadelphia has a law that if you have a new large building in the Center City area, a certain percentage of the cost of the improvements must be made available for public art on the property.   I'm used to it.   Art becomes part of the background.

This little wall was on a private property, not at all public, it was on a corner of the streets, and somewhat incongruous in its location across from the Key West Cemetary.   It was as if the owner of the property had a wall that got partially demolished by a hearse that missed its mark, decided that they could do something creative with it.   So the owner took some mortar, coated the bits and pieces with it, and stuck some mirrors and colourful bits and pieces to the wall.  I'm glad that Art can flourish in small towns and large, and while it is not a polished piece, I'm enjoying it in its "primitive" splendour.  Art can be functional as well as beautiful.
Posted by Bill at 8:00 AM