Duval Street at 11AM - Picture 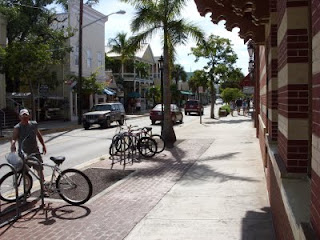 Key West used to be much more crowded than this.   This was taken at 11AM on a Friday morning.   Maybe I'm wrong and just up too early for a town that says its a Great Little Drinking Town With A Fishing Problem and the planes haven't really gotten there yet.

I remember back before the incompetent Bush (not his father who was merely average) wrecked the economy with the Republican Recession that at this time of morning, people would be out walking the streets and I'd have problems getting anywhere without having to avoid some tourist from somewhere else in the country.   Now the place was noticeably less popular even at night, and it was full of Europeans speaking German, Slavic Languages, French and the like.   I went to a custard stand at 10PM Saturday Night in the heart of the tourist/drinking district of Duval Street and was able to enjoy my custard in the middle of the sidewalk and not have a problem with blocking other passers by.

I'm standing one block from where the sunset celebration happens every night in this picture.   First Block of Duval at Front Street.   This Street View will show pretty much the same sight, fewer walkers and fewer cars than I remember.   I also noticed that there were more T Shirt Shops with stupid sayings and low end junk shops instead of the art galleries and home made and local made jewelry that I liked to look but "wasn't for me".

I really hope that things start up again soon, there are too many hungry people out there "off work".
Posted by Bill at 8:00 AM