Are We There Yet? Back Seat Navigation From A Distance With Glympse 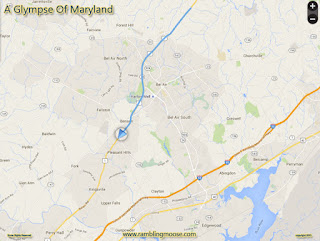 Being that annoying kid with the map in the car served me well.

I've always been excellent at directions and cartography.  Actually I can stare at online maps and wonder about the weird little quirks in boundaries for quite a while.

Sure, how to keep an idiot occupied, hand them a map.

But that does get to be a useful quirk.

When a friend came down from Atlanta back in May, he told me about this service called Glympse.  You install an app on your smartphone, send someone a link, and you get to watch them drive.  They're represented as a little triangle on Google Maps, and that triangle moves based on the location of the phone.

It gets freaky when they're sitting next to you and the triangle changes orientation as the person spins in the room.  Just think of what the commercial or law enforcement people have to use.

But that gets very useful when someone is coming to you or heading home.

Actually, it's good enough that I already know that you pulled off the road, and that you started slowing down to use the exit because I saw your speed drop from 70 to 50 and you changed lanes.

So as someone got ready to cross into Maryland on US1 I got a phone call.

"Did you get my Glympse yet?"

I grabbed the link and started watching his progress.

Yep.  How to keep an idiot entertained.

The only drawback he had was he said that it is limited to 4 hours.  When someone is traveling for 2 days, that is a bit of a limitation.

Since he's taking Autotrain back from Lorton VA to Sanford FL, then driving here, I get to see the holes in the cellphone network.

Just south of Jacksonville, I noticed that his little triangle would get "stuck" then come unstuck and leap forward every so often.  They're not putting cell towers in the swampy back woods areas because nobody is there, or shouldn't be, on the railroad tracks anwyay.

Well there goes my next two days.  Watching a blue triangle work its way across a map.
Posted by Bill at 10:28 AM