Classic White Bread or a Clone Of Wonder Bread? You Decide 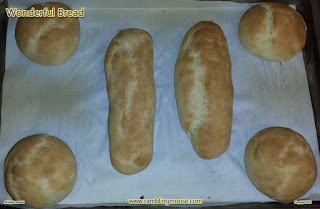 I finished up the "pressing tasks" of the morning rather early.  Happens when you're up almost two hours before sunrise as a normal habit.

I was debating what I wanted for breakfast and realized that everything I wanted needed to be baked.

I'd have something else, but I would make everything later.

I ended up baking some Cream Biscuits for Biscuits and Sausage Gravy for the next day, and a Pizza In a Skillet for lunch.

But I realized that I finally had enough room in the freezer to make up a batch of rolls.

Since I was sitting at the computer doing some decidedly random surfing, my mind turned to Reddit because it had been in the news lately, and I started hitting some random subreddits within the site.  Each "subreddit" is an old school list of topics that people can write about.

Ending up on a subreddit devoted to recipes that are clones of commercial foods that we all enjoy, I started reading Mimic Recipes.

There are a host of things there that I will be trying, but I did find something to help with my need for rolls.  I was intrigued by a Wonder Bread clone recipe.

Yes, Wonder Bread.  That "stuff" that you feed your kids.  When it goes stale, if it ever goes stale, it makes good to excellent French Toast.  A whole generation was raised on Peanut Butter and Grape Jelly, on Wonder Bread.

The last time I had the stuff it tasted ... like air.  I had grown used to thick crusted rolls with actual flavor.  "Ethnic foods" changed my preferences.

I wondered how close to the old Wonder Bread I could come with this recipe.  Even Wonder Bread isn't the same as I remember it.  The crusts were rather strongly flavored when I was a kid, in my own memory.  The Bread itself would be great to roll up into a dough ball and chew but there wasn't a particularly strong taste.

I have to say, this recipe pretty much nails the crust taste, but the inside had a light flavor that wasn't bad.

I didn't have the semolina flour that was called for so my own recipe used the commercial All Purpose bread flour that I keep on hand.

In 25 pound bags.  Cheaper that way.  It also reduced the price of these rolls to about 7 cents a piece.  Maybe a buck a batch give or take.

Will I make it again?  Sure, not bad.  After all, the company did get bought up after it went bankrupt and their bread is being sold everywhere just like the good old days.  Someone out there must like the stuff!

Call it a "Classic White Bread" recipe and skip all the double talk, it was pretty darn good last night with dinner.