Momma Duck and Her Chicks at M.E. DePalma Park 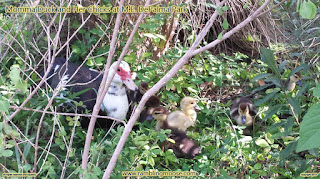 When you place a natural habitat near water, you're going to get water fowl.

It means that you live in a city that is Progressive enough to understand that Nature belongs where people do.  It means that your city is actively taking part in keeping a bit of the environment natural.  It also means that they're watching out to make sure that you aren't "Cheek-to-Jowl" with one tacky house slammed up against the next one.

Nobody likes that except for the real estate developers.

I'm lucky enough to have this little gem near my own house.  M.E. DePalma Park.  I have the knock-off effect that the butterflies that I love to watch float over to my own yard and do whatever it is that Butterflies Do.

I suspect it has something to do with the nectar in my Bougainvillea wall, and the other flowers that I have here.  That and the Monarchs that are aggressively keeping my Mexican Milkweed trimmed down to sticks.

Silly butterflies, but that is what I plant the stuff for.

It was one of those Dog Walks.  I seem to see the most interesting things on these walks, from natural to the human-space, as well as quite a lot of quirky things that go on here.  It's an entertaining city to live in, Wilton Manors, Florida.

We walked past the little park that evening.  Me and my sidekick, Rack, the McNab SuperDog (TM).  If you want to get to meet the neighbors, get a dog and go for a walk between 5 and 7 any evening.

I was gathering my act together and Rack had spotted them.  My being self-absorbed in the work of tying a knot in a "dog bag", and we all know how enthralling that can be, allowed Rack to pay attention to the hissing in the underbrush.  I stopped what I was doing and paid attention.

Momma Duck had taken up residence in the park under some trees in a partial thicket.  She's been there long enough this year for me to believe that she laid the eggs there and would waddle down to the South Fork of the Middle River that keeps us happily separate from Fort Lauderdale, and find food.  She would then return and tend to her own flock.  There isn't enough wildlife that would want to turn those eggs into an impromptu omelet here in town, so I'd say she's safe where she is at.

Momma didn't like my standing there getting my camera ready, and the babies wandered off one after another.  Finally Momma left, hissing at me.

Seemed a little half-hearted, but these Muscovy Ducks are the distant descendants of pet ducks that had been brought in many years ago.  They've never been a nuisance that I have seen, and they do keep some of the other pests at bay.

Or at least at river.

Having gotten my pictures, I told her goodbye and got ready to leave  She stopped hissing as soon as I made my comments, and went back to the business of tending to her little brood in the little corner of the little park in the middle of the little Island City.
Posted by Bill at 9:31 AM