A Housefull Of Windows Replaced In Two Days 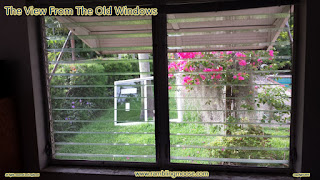 Part of living in South Florida is accepting the environment and preparing for it.  Oh, sure, you do the same in other parts of the country.  Actually you do it everywhere, but you generally don't give it all that much thought.

When you move in, set down roots in a new place, you begin that process that you learned when you were growing up - but didn't realize it.  You adapted to your environment, and bent what you could to fit it to your own preferences.

Neither is the City.  Records are a bit sketchy.

We do know that nobody did any major renovations here.   A pool was added in the early 1960s, or maybe the 1950s, there isn't a record of that either.

Someone laid tile in the "Public Areas" of the house.  Right on top of the grey travertine, or what ever it is called.  You could correct me and an hour later I'd get it wrong anyway.  One of those names I can't keep in my head.

It was actually laid by most of the Police force of the City at the time.  They did a crappy job, just like anyone you'd expect to be drafted to do something by their boss.  Some of the tiles have a hollow sound to them when you step on them, and the grout is crumbling.

Another project for the future.

But past that, the cabinets were put in and left alone, just as most of the rest of the bones of this place.  We're replacing some fairly major systems here as time goes on.

The first thing to go was the fire hazard of the electrical panel.  Do yourself a favor - find your electrical panel and see if you have the words "Federal Pacific Electric" on it or the initials "FPE".  If you do, you had better replace it.  Major design flaws resulting in fires.  Such a bad design that the company was bankrupted and stripped for parts.  They actually cheated on the "UL" tests and got the approval they were looking for then sold the hell out of those faulty Stabloc circuit breakers.  Go check, I'll wait! 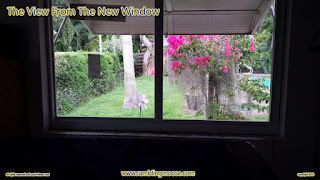 Impact resistant windows.  The words "Impact Rating: Large Missile" are written on that sticker on the windows and are waiting for the inspector.

I won't test that although I did get a chuckle out of the phrase.

Much quieter too.  I'd say it knocked the noise level down outside to where I can't hear the cars on the street and I'm hearing different sounds from inside the house.

I may have to let some of the old style mechanical clocks stop because they're now so prominent when the radio or TV is off.

The sounds changed so much that now Rack is alerting to different things.  He actually "moofed" at the ice maker until he got told it was OK and got used to it.

It was 2 solid days of construction.  Knock out 27 windows, replace with 18 or so, and then caulk everything.  New woodwork.  Stucco where needed.

Oh and lets not forget that while all that is going on, the house is effectively without windows.  No, not "open windows" but "missing".  Letting in a Mosquito is not an option.  Letting in 50 mosquitoes was what happened.

And "Letting In" is not exactly correct so much as they let themselves in.

We have a thing that looks like a tennis racket.  It has a set of parallel wires and when you swing it through the air, it will zap any bug it hits into a vapor with a white hot flash and a "SNAP!" sound.

But it works.  When the first day of demolition and construction was finished and we were sitting in the chair, one swipe through the air killed 21 mosquitoes.

Inside the living room.

The next morning I killed one on each arm before construction began anew.

I'm a quart low at this point and the top part of my brain is drying out from the donation.

But it is mostly done.  One window left and we're done.