Whether you think they are invasive, or a nice ground cover, they're really quite simple to grow. 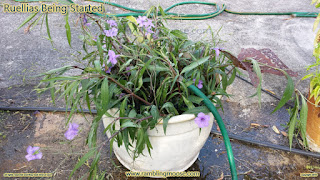 I'd say that they're easy to grow because they can be mildly invasive.  I have a hedge of them, about 75 feet long.  They grow about knee high, taller if they are undisturbed, so the word "hedge" is a bit of an exaggeration.

Why I am spending time on this subject is that there are people who hit this blog for the subject on a daily basis.  I am not sure how I became an expert on them, but... Hello!

The reality is that they are like Hostas are up North.  Ruellia are dead easy to grow in South Florida and other warm climates, used as ornamentals everywhere here, and will grow from cuttings.  They will take the cold down to freezing without too much notice (Zone 8), and will die back to the ground if it gets into the 20s returning next year (Zone 7).

Oh, I could be done with that right now but anyone who reads my blog on a daily basis will tell you I've got a story behind it all.

That wilted pot of weeds above will turn into a healthy looking pot in a month, probably be pot bound and ready for planting in two.

Simply put, I have about 6 to 12 inches of potting soil in there.  I keep the soil quite wet until they "take" in about a week.  The planting was as dense as you see it - a vase full of cuttings would do the job as well. 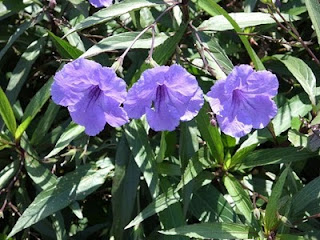 In April, knowing a friend was coming down for a visit at the end of May, I started the pot.  By his visit, the pot had a healthy and lush growth of deeply purple flowers and one random Mexican Milkweed growing in the center.

My friend went back home to Atlanta, and that next day I went out and tested to see if the pot was ready.  Giving a handful of the plants a tug, it lifted the soil loose from the rocks that I have as a layer for drainage. 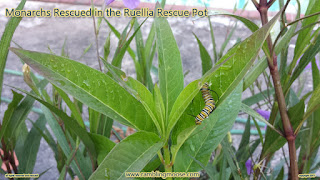 They came up as a mat.

The beauty of these things is that they don't require a lot of water, only when you're getting them started for the first week or so.    The normal soil moisture they get from the irrigation twice weekly is what they're happy with, and they're in a dry spot in the yard.

I dug a hole as deep as the root ball I had in a dry spot that needed something put in it.  I set that root ball in the little hole I dug, then watered it and walked away.  That's about it.  It "took" immediately and you wouldn't know that it was just recently planted.

I then started the next pot.  At this point, about a week later, the wilted plants are beginning to "lift their heads" and grow upright.  I'll be pulling that auxiliary hose out today since they just don't seem to need it to root. 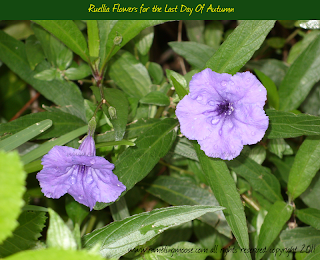