Moving Ducks Out Of Harms Way

I think I have spent the better part of the week moving wildlife on.

I'm very good at moving geckos and lizards out of the house.  We've got a clear plastic cylinder that I place over the critter.  They don't realize they've been captured.  A piece of paper is slid under them and they run up into the cylinder.  Out to the garden they go.

There's a normal patter of mosquitoes that were getting in the old windows.  About one a night would be moved onto its next life as something more useful.  Perhaps a leech or other nasty creature.

The Tree Frog was moved on when construction and demolition happened.  I'm sorry for that one since I am really quite entertained by them.  There's a piece of plastic that serves as a lean-to and if it comes back, I'll make something more permanent.

Then there are the ducks. 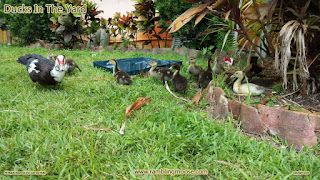 Muscovy Ducks.  They're semi-wild distant relatives of the pet ducks that some neighbor invariably has somewhere in your town.

Harmless creatures if left alone, and they can become quite tame if gently handled.

My own version of Gently Handling them is to let them be and do "Duck Things" unharmed.

I've been told stories that I call urban legends.  Someone has a friend of a friend that said that the ducks colonized their swimming pool in the next town.  They fouled the water, made the pool deck dirty, and made them a Sad Panda.

First problem with that is that if there is no food, the ducks will move on, so they won't really hang around where they're not welcome and hungry.

There was a problem with my own Live and Let Live attitude this weekend.  Construction.

The gates were left open to the backyard and people were literally all over the property.  Tools were set where needed, cars were being moved all day, things were dropped.  The normal kind of bedlam that happens when you're having work done.

I had baked some chocolate chip cookies from The Internet Recipe using home churned butter as a thank you to my two neighbors who were allowing us to park the cars on their property.  The one neighbor was in and out all day but came by with some leftover pizza since they weren't going to be there.  They're moving out soon.

I saw them and came out with a pound of those cookies and said "Turn about is fair play!  Here, have a carbo load!".

Coming back to the house, I saw the ducks.  They were heading into the backyard.  Not good.  There is a corridor between the fence and the house and the ducks would be harmed if a boot came too close.

Harmed, stressed out, bothered.  I had no desire to do that or have that happen.

Rambling Moose to the rescue, I herded them back out to the front yard.  Momma Duck should be used to me now, she sees me all over the neighborhood.  I simply walked behind her and her brood.

Of course I had to get pictures.  She should be used to that too. 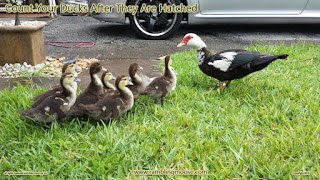 Closer to the park at least.  They'll get there eventually or if not, they found a nice quiet place to hide.

I've come across her and her charges very early in the morning.  She's sleeping with her ducklings under her like petals on a flower radiating from the center.  I have heard others mention her so she's a minor celebrity in this part of town.

I'm just glad we're able to keep her safe.  The babies can't fly yet, and while she's welcome in my yard, I'd just rather have her in the front yard and leave the pool be.

Especially with hammers and ladders and boots everywhere.
Posted by Bill at 9:32 AM