Lizard on a Hot Tin Roof 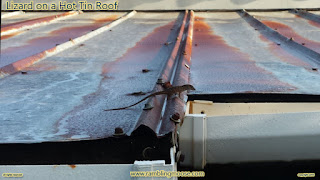 Up North in the Big Cities, if you find any wildlife indoors, you call an exterminator.

I don't mean pets, or your weird relatives, but "wildlife".

Here, I've grown a bit more relaxed about that.

When I moved to South Florida, I remember being told a few "important things".

Always bang your shoes out on the ground.
Check your bed for spiders.
Don't go swimming in a lake, there are gators in the water.


Ok, the Gator thing?  Yeah I believe it.  I was at a park in Dania Beach once and had to leave a dock because I saw a gator approaching.  I think it wanted to turn Lettie into its next meal.  She didn't know what to make of it and was getting agitated.

Trust in Dog, I got out of there.

But the shoes thing?  Nah.  At least not in my house. They were trying to throw a fear into me about scorpions.

Nine years later, I have seen exactly one scorpion and that was living outdoors where it belongs.

Now mind you, wildlife does get in.  We have killed more mosquitoes here than I care to count.  We've also got one of those cool tennis racket looking dealies that you press a button and wave through the air.  You see a flash and hear a "SNICK!" and the nasty girl is vaporized.

They're always female if they're trying to bite you.  Always.

Spiders?  Not if you make your bed.  Plus, like Constance says, the bed just LOOKS better if it is properly made.  You could bounce a quarter off that blanket!

On the other hand, there are my Lizards.  Typically they are Cuban Browns that get in, but there are also the pink Geckos that end up being seen right around dusk.

The Geckos get hungry and come out looking for food.

Hey, Geckos!  You're slacking.  Go after the mosquitoes and I'll even set up a habitat for you!

Don't laugh, there's a story I was told about people in New York City keeping lizards in the house like you and I do with dogs.  They run around and eat cockroaches.

If I see cockroaches, we call and have the house tented.  *shudder*.

But the Cuban Browns are everywhere keeping a watch over you.

I have never found them in my shoes, but they do get in the house.

For some reason people fear them.  I'm deeply entertained by them, and I think they know it.

Yes, I am the Lizard Whisperer.  Or something like that.

But tapping your shoe on the ground before you put it on?  Only if it was left in the closet too long.  Then you might have to worry about those spiders making a web in them.

Oh, in that case, they're most likely dead.  After all, a web in your Size 11 Boot won't catch many bugs to eat behind a closed door, will it?

They can't bite you, although if  you find an ornery one they will try.  They just don't have any teeth.  Just like Grandma, all they can do is gum their food.  Girls would catch them and get them to bite their earlobes to wear lizards as earrings.

I guess they tickled.  Silly girls.
Posted by Bill at 9:42 AM