It's been a week of this.

It's time to up the game.  To bring in the big guns.  The Next Step. 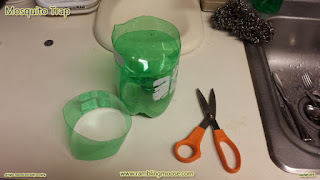 The reason is that since the construction we had on the house, I've been plagued by mosquitoes.   I have finally had enough.

Last night, I was in bed.  The house was quiet and there was only one light on.  That light was over the bed in the back of the house.

I saw a black dot flick across the computer screen.
I saw that same dot flick back.

I knew I was being targeted.  A mosquito had found its way to the most distant part of the house from any door or window that had been opened in days to find me.

Sorry, Miss Mozzie, but I am not your food.

I pulled the covers up as high as I could get them leaving my arms exposed and waited.

She came in close and landed on the back of my hand.  I wasn't fast enough to kill her.  She flew off.

More targeting and she landed on the other arm.  This time success.  I could sleep safely.

The next morning there was one in the bathroom so aggressive that I couldn't use it for its intended purposes until I unleashed sweet death on the creature.  I used bathroom tile cleaner on it all the while laughing like an old movie villain.

I thought to myself "Evil thing" as I went back to my desk forgetting about the Intended Purposes.

At my desk, I managed to kill one more using the "Tennis Racket".  It's a tennis racket shaped appliance that has parallel wires where the strings would normally be.  You flick it through the air and it makes a satisfying "SNAP!" as it vaporizes the life out of a worthless bug in a brilliant blue white flash.

Rack, the McNab SuperDog (TM) hates that thing.  Every time I go on patrol looking or more of those blood suckers, he cringes.

"I'm tired of this!" as I walk into the kitchen and grab a 2 litre bottle that I saved for this purpose.  Cutting it in half and then trimming it down, I make a mosquito trap.

Add about a cup of water, two teaspoons of sugar, one half teaspoon of yeast, I shake the mixture up.  It's now making carbon dioxide on my counter.  I'm hoping the little monsters find it.  I'll then target them again with the Tennis Racket of Doom.

Time to evict the house guests.

Yes, it's all happening indoors.  Before 8AM, I killed a total of four mosquitoes, one of which was trying to bite its way through the blue jeans I have to wear inside and outside to not be targeted.  I guess I have that Sweet Blood everyone hears about, always have.

But it's time, this has to end.

As for that trap?  I had one outside the house for a while.  It didn't actually "trap" the mosquitoes.  I think they may be too smart for that.  They merely made a cloud around it trying to get at the CO2 emitting source, but realized that it isn't an actual creature, they flew off.

If that happens here... I'm prepared.

Besides, next step is chemical warfare.   I have a can of bug spray, and I know how to use it!
Posted by Bill at 9:27 AM