A Bird For The Background

I found myself in a novel position.   I was reeducating someone on "How To Florida".

I had always said that once you come here, you adjust and when you leave you have to adjust back.

This is an odd place.  Most of everything you see is artificial.  The Natural was pushed aside, flattened, mined out, leveled, and ignored.  Then we came in and put in "grass" and Palm Trees, and Spanish Mission Architecture, and Mid Century Modern buildings. 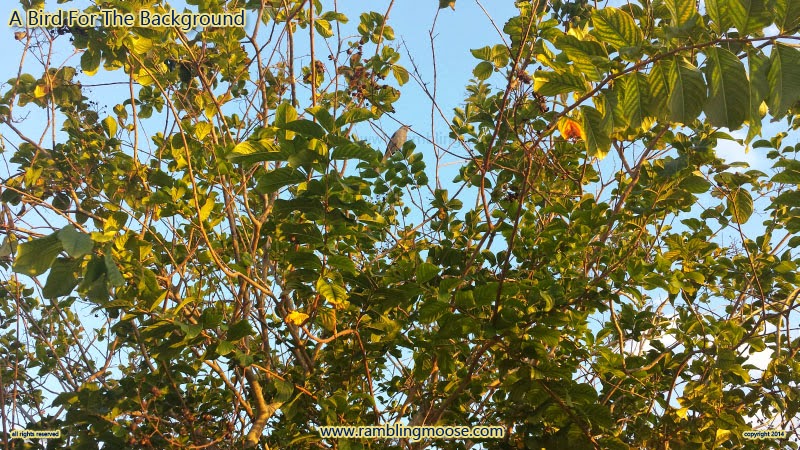 Everyone loves Palm Trees, Right?  They'd line broad boulevards in long rows of sentinels guarding the homes we built there in the sun and grow.  Slowly, they would become taller until eventually they would get struck by lightning and have to be replaced.

That's actually a benefit for Florida is where Lightning is Born.  More people are injured per capita here in Florida than any other region in the country.  It might help to explain the mindset here.  Maybe someone had their coconuts electrified and now they're just a bit odd.

Some of us are, thankfully, waking up.  The lawns are never logical in a climate that is a desert for six months of the year and a flood for the rest.  The Palm Trees hit the aquifer that is only a little bit below the soil and soak it up and thrive, but given a chance, there are better things to plant.

Those native things that got pushed aside in the 1950s for example.  Gumbo Limbo trees that look like a tourist that had been let out in the sun too long is a perfect example.  The monstrous sea grape that hit the water table years ago and gets trimmed back about 10 feet a year only to come back just as monstrous as before.

Native trees are making a comeback along public roads and commercial areas simply because they are easier to care for.  Something that is adapted to the climate is easier to deal with than something that may run amok.

But this was his first walk back after being away.  I got to repeat the mantra "You need to get used to it again, it's not hot, it's only 76!".

Actually it was an amazing afternoon for a dog walk.  Not a cloud in the sky, light winds, low humidity, and warm breezes off the ocean.  The air was crystal clear as a result.

No, not bragging, I'll shut up here or else you'll just come and visit.  We have our "off season" starting in June when we're all looking over our shoulders at the long distance radar shots at that storm off Cape Verde in Africa and wondering whether it will come this way or just be another fish spinner.

After being in the UK for two weeks, Kevin was melting.  He got to experience Winter in the Isle of Man.  It rains sideways, never seems to freeze long, and when the sun comes out, everyone runs out of the office buildings to look at the strange glowing orb in the sky like a chicken in a rainstorm.

Close your mouth, bird, you're going to drown.

The whole time I am walking around town in a Polo Shirt and Jeans, he's muttering how hot it is.  I'm telling him you're just not used to it.  Thinking about the last time I was a snowbird, that's exactly how it felt.  Nobody goes to Douglas, Isle of Man for vacation in the middle of February, it's a miserable cold that soaks into you.

"Just let yourself thaw out, and get used to it.  Take in the conditions, it's beautiful tonight!"

At that point, in the middle of our own central business district, in the din of the rush hour, after the 50 Bus passes by we start to hear the siren call.   Actually it was a bird, singing loudly, as if to tell us that we were sharing the place with it and it didn't care that we three were there.

In fact, the bird was a bit of a show off.   I slowed down to find the creature, and it even sung directly at me.  Mouth open and a loud chirping birdsong.

My own romantic thoughts about how pretty it sounded over the traffic aside, Birds call for two main reasons - to find a mate, and to claim territory.

The bird didn't seem to care.  As we passed it and walked out of range it was still singing away.  We bickered about conditions, and enjoyed the weather.  It really was a beautiful night.
Posted by Bill at 9:44 AM