Despite it sounding like a British Pub somewhere in the Southwest, it isn't.

It's the busy season, dry season, and buzzard season. 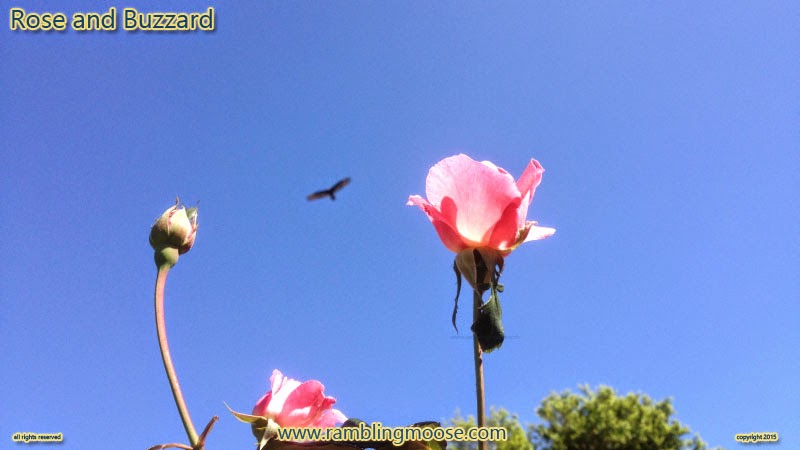 Everywhere else it's cold and snowy but I'm below the freeze line, and I thought I might share a little sunshine with my friends.

Even if you don't have a security camera system to look into to see the sun, you can catch some here.

The season isn't as dramatic as it was last year.

Oh sure the roses are in bloom but so is the wildlife.   Last year there were hundreds of buzzards making lazy circles in the skies.  They would float on air, sometimes low enough that you would be interesting to them.  Wildlife encounters, I am used to, but having a bird that looks like it's as big as you are turn its head from 50 feet or more up so it can size YOU up is an amusing and unsettling prospect.

Hey, buzzard, back off, I'm a bit gristly.

Besides you don't want to startle them.  They've been known to barf up whatever road kill they have been eating and you may be wearing it.

But the weather has been crisp and clear.  Good day to watch the buzzards, and sniff the roses.  Mine are in perpetual bloom, and each time one gets just right, it comes in to the kitchen to sit in a glass so I can enjoy it.

Better that than have it pass unnoticed.

I keep hoping that cutting the plant back will make it grow in more bushy but I'm having no luck with that.
Posted by Bill at 9:51 AM