I haven't ever done the Sunset At The Beach thing.  I've usually got too many things going on at Sunset.

I've seen many Sunrises.  Seeing that I'm up early in the morning, and at this time of year it can be as much as two hours, I can watch it rise over the street or over the neighbor's Gumbo Limbo tree, just over that way.

But Sunset in January is when I'm out walking the dog.

One evening, for some strange reason, I started getting phone calls on that walk.  This wasn't like when I was the Chief Technical Officer for the consulting firm.  Those late walks I would spend in a long distance phone meeting most nights.  Holding someone's hand, giving guidance, and directing a company that would later fade away.

Interesting way to spend your nights, managing a company, and trying to save it from itself.  Try that while walking a dog through a major shopping and tourist area.  It was a challenge.

But this night the calls were a bit more mundane.  I was holding hands again.  It all got a bit too hectic when I got the second call after two texts.  Rack and I hadn't walked more than two blocks.  We usually do a mile at that time of night. 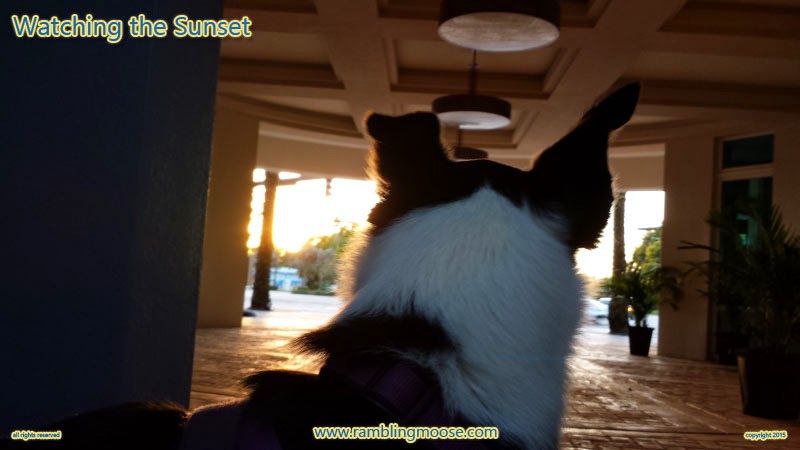 Why not take advantage of the lay of the land?   I sat down at the Gables Wilton Park, on the bench, under the overhang and watched the goings on as I reassured someone that their business plan was sound, they were doing the right thing with their employees, and there really wasn't much more to say.

Gathering myself together and petting Rack, I noticed what he was watching.  Usually he's quite afraid of the traffic noises but for some reason he was more calm.  While he was seated against my right leg, he wasn't shivering.  This is a dog that will shiver if I drop a spoon on the floor.

You have to listen to your dog.  Trust in Dog.  They know what's going on even if you're too busy with your own and others problems.

It was a good spot to watch the sunset.  Instead of going out to the ruckus of the drive immediately, I took a well earned breather.  We got to sit there until the sun set low enough to be annoying to me, then went on our way.  After all, people travel from other nations to be in this same city that I walk my dog, so we may as well enjoy it.
Posted by Bill at 10:12 AM