Amaryllis In Bloom, iPhones, and Other First World Problems 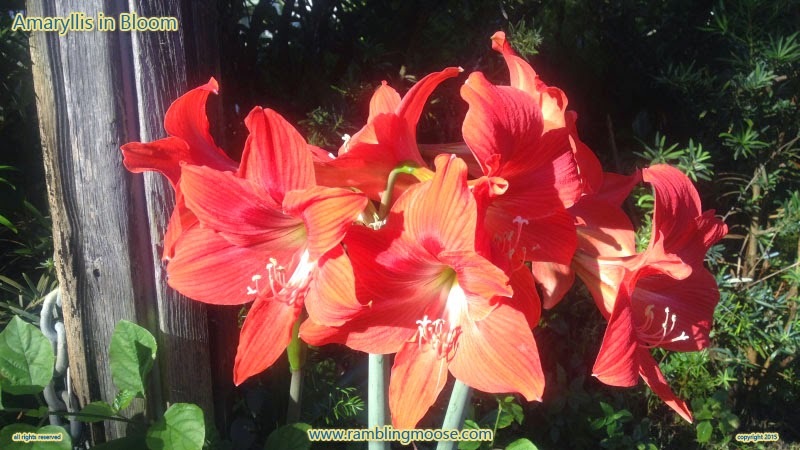 Have you ever had one of those times where you thought something, stepped back and rethought that thought, then realized there are truly worse things in the world than what you're going through now?  First World Problems?

It's the technology equivalent of a toddler coming down the stairs, seeing you for the first time, walking over, sitting next to you on the couch, opening his mouth, and crying.

Yes, that happened to me too, and you know who you are who did that.

Ok, so I am channeling that toddler today.

I have known that the cameras in cellphones aren't all that great.  Then I got the Samsung Galaxy S4 which has a camera almost as good as the standalone camera that I had been using for years.  The drawback is that the S4 has a fixed lens so no Macro Zoom allowed unless you buy one of those $3 snap-on jobs that looks like something a jeweler would use.

I may do that.

But I had a problem.  Someone needed to stay in touch with me, internationally.  He went to London, and yes I am jealous, then to Douglas on the Isle of Man.

Who goes to Douglas on the Isle of Man in the middle of the Winter anyway?

Never mind that, it's for business.

He's on an iPhone and instead of spending insane amounts of money for international texting, he suggested I use my old creaky iPhone 3GS.  We ruled that out since my SIM won't fit in there.  But luckily I was loaned an iPhone 4S for this purpose.

Now I can internationally iMessage him for free.  Free is good, my budget is tight.  The idea of even paying for a text these days offends me to no end, and I was very late in the game only upgrading my plan when T-Mobile changed things around to unlimited talk, text, and 1GB data.  It's enough and it's the same cost I had before.  Since I hardly use the phone for data, I'm good.

Now I have this iPhone in my pocket.  First thing I noticed is that it's small in my big hands.  Being 6'4" tall, everything is proportional, and the big Samsung with the gorgeous 5 inch AMOLED full HD screen that literally lights up the room fit me perfectly.  This 4 inch iPhone looks a bit "Barbie's" phone in my hand.

All the apps I had on my 3GS that I got over the years moved over and I'm back to "normal" whatever that is.

I went out and started taking pictures.

Mind you, when I sell my next picture, I'll sell my first.  Not a professional.  Maybe a Prosumer, what ever the hell that means.  I take pictures to remember what to write about, and I do take care to make the pictures as good as possible so they may be interesting to the hundreds of whoevers that stumble across this blog now and in the future every day.

Go ahead and graph that last paragraph, I know it is phrased clumsily, I'll wait...

This weekend was the first time I tried to look at the pictures on the laptop.  I noticed two things.  The pictures were over-saturated.  Also they were fuzzy.  To be fair, it's an older phone.  It's been repaired professionally.   Good looking beast, but it's clad in glass on both sides.  Apple recognized their mistakes and went to plastic and metal for the back.

It's possible that the focus could be slightly off due to "deceleration trauma".  That could explain the focus but not the color intensity.

So for now, I'll carry the two phones and hope for the best.

The best you ask?  I get an attitude adjustment and stop being so fussy.   I'll also use the Galaxy for pictures.  Looks better in my big paws and takes better pictures.

The iPhone is a communication device anyway.  The camera there is an afterthought.
Posted by Bill at 9:53 AM