Shamrocks In The Sun

When someone goes away, you try to keep contact.

Then if they're gone long enough you try to have a bit of fun with it.

In this case, I started getting texts while I was out back.  Rack was boring holes through my soul with those brown puppy eyes of his.

I'm thinking somethings up... Maybe I should ask Rack what he wants?

Skid marks in my Florida room as he ran to the back door.  He probably wanted to visit his other family on the other side of the wormhole behind the shed.  I grabbed the phone, checked that the front door was closed, and let him out back.

Yes, really, the door sometimes opens on its own.  It could be me, or it could be Rack's wormhole family, but I do need to make special effort to keep the door locked.  If it is locked, it won't open on its own. 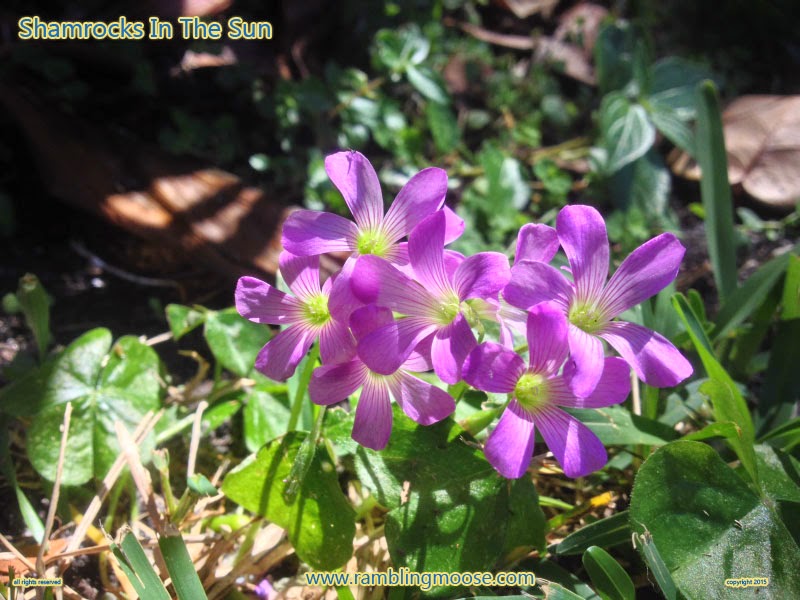 "I know.  Rack is enjoying it."  Picture sent of Rack watching over the swimming pool in full sunlight.  The light making diffraction patterns in his jet black fur shining in deep blues, vibrant reds, and ...

I was walking to the back of the yard.  The pool water was a wee bit low.  May as well give it a hot foot and raise the level a bit.

"I thought you might enjoy a little sunshine.  Everything there looked so cold and grey.  It is the UK you know.  Lovely people, fascinating culture, I'd love to visit some day, just not in the middle of the coldest week of the year"

I get back a single word "Shaddap".

I send back the picture of the shamrocks.   They're Wood-Sorrel.  It grows as a weed in my turf in the back yard.  Technically it's Oxalis.  They grow little tubers, just like the potatoes that are sprouting in the kitchen, and can be cooked or eaten raw.   The tubers are sweet, and edible.  Although they do contain Oxalic Acid, so do many of your foods, and as long as your Wood Sorrel is cleaned well, the risk is considered minimal.

But I will let someone else try first.

Yes, I am channeling some of those oddball survivalists.  You know the guys who say "Every part of the pine tree is edible" - and I pipe up telling them to go to the lumber yard and eat a plank.  But Pignolas are simply the seeds of a pine tree, and every pine tree has seeds that are edible.

The sun caught the pink flowers just so, five minutes later it would be dark.   The mosquito sunning itself on the top flower realized that she might be able to find her own meal and started after my feet first.

Snap off a few more shots, and go away from the little flowers.  Rack was returning from a visit from the wormhole family and tearing up the turf while running circles around the bougainvillea, coleus, and big palm trees in the yard.

"I know you didn't choose to go to Douglas in this time of year.  Maybe some other time.  It does look like a pretty place.  Bring a Parka."

I'm getting a lecture of a street that is called "Athol" street in the central business district.  I read the word rudely, and realize it is his favorite new word.  Probably named after some oddball British Admiral that conquered some obscure island somewhere.

Every picture he sends me has a splat from a passing sea bird.  It now becomes The Isle of Poop.  Douglas, Isle of Poop.  Not nice of me but there is rather a lot of it, and that is a part of being near the ocean.

It's time to go back in.  The mosquito is zooming in for the kill.  My right hand was getting attention as I try for one last picture of the Wood-Sorrel Shamrocky thing.  Pretty flowers.  I look at the display on the camera and back to the flowers.  They're in shade now.

Maybe not.  He hates fish, loves the chips, and there's no way I can suggest that.  Maybe some fried wood sorrel chips.  I won't tell him what they are!