Selective Hearing In Dogs Can Be A Help In Training

It's the dry season in South Florida.  That is why you folks are clogging up our roads and putting money into our businesses.  The weather is nicest this time of year for people from out of state.  Their homes are surrounded by something we'd put in our drinks and our freezers, while we're complaining about something that would make a Scotsman sweat in the "heat".

It's also a great time of year for us to do some outdoor chores like pest control.  Our homes are constantly being invaded by the great outdoors, and if you don't want to live with great patrols of ants making their way inside to carry you off, you get on a first name basis with a pesticide company.

Herbie.  His name is Herbie.  If you ask me nicely I will even give you a reference.

But Herbie, as good as he is, can't be here the entire time.  We got some pellets and spread them around the foundation of the home to make a ring of doom for critters.  Sorry, we pay the mortgage, you critters don't.

It created a problem for us.  More specifically, for Rack, my McNab Dog.

Yeah Him again.  You see, he's incredibly intelligent and is learning English, at least the way we speak it.

So one morning we were talking about whether it was time to add a ring of doom around the house, give it a booster shot of poison.  That means that we couldn't let Rack out to run his lap around the yard.  His family on the other side of the wormhole that is in behind the shed will have to do without him for a couple weeks.  The poison that we used is persistent and will take a while to soak in with rains.  Since we have just had our first rain in weeks, the prospect of not using the back yard with Rack is very real.  We put notes on the door so that I will remember, and even one at Dog's Nose Height.

That was the discussion.

He trotted to the back door, sat down and stared holes into us.

I walked over to the door and my velcro-dog was with me, glued to my right calf.  I needed to go outside.  Luckily he does understand more than I think he does, and I get great results when I devolve my own University Educated English into a Pidgin Dog Speak.

I said "Rack, This Says Not For Dogs" while pointing at the post-it note with the thick letters that say "No Dog". 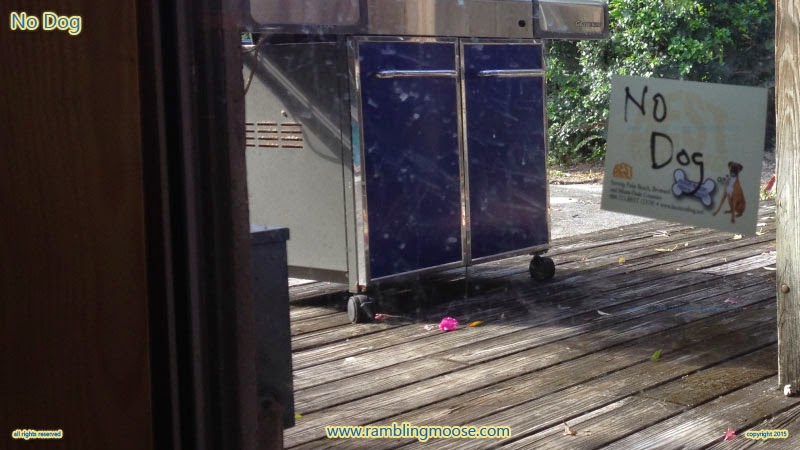 I swear Rack Moaned before he looked back and forth between the note and my own eyes.

"Rack, you can't go out"  pointing back at the post-it I said "Not for Dogs.  No Dogs Allowed".

Sure, I'm channeling an old Charlie Brown cartoon but it worked.  Rack's ears went down, tail dropped from excited to grumble height, and he slunk out of the Florida Room.   I went out back and dealt with the pool's water level and came back.

Rack was staring at the glass door, then the note, and when he spotted me, myself.

See, he will go to the back room when he needs to go Use The Tree out back, and our own routine is for him to stare me down until I pay attention, then I'll ask him "Show Me" and he'll lead me to what he needs.  Kind of like Lassie where they're asking "Did Timmy Fall Down the Well?".

Leads me to wonder why they didn't build a wall around that damn well with kids falling in it so often.

That particular morning I took it a step further.  I got him to go out to the Front Yard on his own.  That isn't a big deal for most, but Rack is highly fearful.  He's afraid of anything noisy, which could be anything from a leaf moving down in Miami to my own making a Kissing sound toward him or the parrot.

I managed to coax Rack out front where the street was, let him Use The Rock instead of the Palm tree out back, and watched as he stopped.  His tail went full tilt.  He saw a pack of dogs being led out for their march round the block.

"Rack, go home".  He looks up at me as if to say he wanted to go play.
"Sorry Buddy, let's go home".  I didn't have to say it again, he was already in motion toward the open front door.

It proved that I had a few milestones passed that I didn't realize I had passed, all because I don't feel like living with ants.

Rack could be depended on to go out front, avoid the pack, and go back into the house on command.  Pretty big step for a dog who would go into hiding and shiver in a corner when I dropped my mixing spoon on the floor the other day.

The forecast is clear for a week more so Rack will be out back only on leash. That's a shame because I really do enjoy watching him run around the property like a CrazyDog.  The grass will grow back where he "corners" around the big palm tree and accelerates past in a black and white blur on the way to the wormhole behind the shed.

But, the good thing is that we just had a mid-term test and passed with flying colors.  He's well on the way to becoming another Dog Of A Lifetime like my Lettie was.  I could open the door to the house, she'd do her thing and come back, completing whatever tasks I told her I needed done on the way.  I swear if she had thumbs, she could have built us that pergola over the spa I was thinking about.

Rack is learning.  He may not get a construction permit, but he's figuring out life, and at this point that's a good thing.
Posted by Bill at 10:04 AM