I had noticed that some of the sprinkler heads were not sprinkling.

I'd get a weak dribble from some.
I'd get nothing out of others.

That means things were wearing out.   Knowing who owned the property before we did, I suspect that this sort of maintenance was merely overlooked for a while before it got sold.

We all do it when we move.

But this is a good 9 years later.   Sprinkler heads would clog from "scale" and sand gets into the pipes.  Pipes became unglued or the glue would simply wear out through time.

I started to look around the property.

You know that's a bad thing.  It eventually created problems. 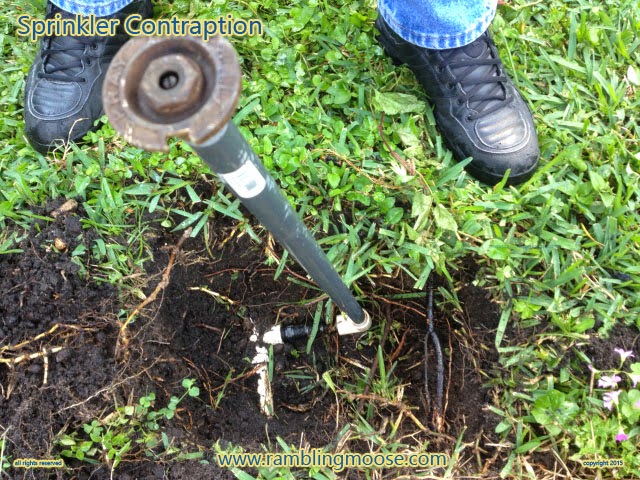 The front yard, Zone 1 was pretty good.  It was the one I would notice since I am either coming home or leaving while it is running.  The dog needs his walks and I'd spot problems.

Great, no complaints.  "Hey, the side of your car's getting watered, you should look!" and magically it gets fixed.

The back yard, Zone 2 is a different story.   It runs the perimeter of the yard.  We hung some extra sprinkler heads off the system here and there to take some of the pressure off, but in reality I think we may just have a too high pressure pump for what is back there.

I looked at the hedges on the one side of the house.   The soil at the back is so wet that my boot would sink into it, there is mildew growing on the pavement, and the plants are over watered.  At the front, the soil is so dry that the hedges were dying back.

You notice these things while you're using the hedge clippers.

So I ran Zone 2.  No pressure to the front, too much to the back, and a pipe had separated.

Thankfully it got fixed without my having to cram myself into too small a space.

Really, no, Thanks!  Putting a Moose of a Man in that spot where the pipe weld had separated.... nope.

That made things all nice and tight.

That created other problems.

Take a balloon.  Inflate it.  Now press in one side, it will bulge in the opposite side.  Psychologists use that imagery to describe a psychological problem.  If you "push something down" or hide a problem, it will just bulge out somewhere else.   Your psyche.

When I took Rack the Superdog out the next day after the sprinklers had shut off, I noticed a couple things.   The hedges were much more evenly watered.  The pipe break patch had held.

Now we had a swamp.

Of course it was right next to the lighting for the big palm tree.  You know, electricity and water?

Well the lights worked, but there was a problem with the sprinklers.  While the hedges were fine, the sprinkler heads weren't watering the other hedge.  In other words, my yard had a psychological problem, it bulged.

I had Rack out running around through a wormhole, stepped in a small sink of mud and realized there was something worse going on.

I called Rack, then turned on Zone 2.

Oooh Pretty little river!  The heads dribbled in that area so I walked around and stepped into where the water was pushing up.  Starting to dig, I noticed that the head pulled out of the ground without effort along with an elbow and a short length of pipe.

Oh great, it sheared.  Or something more colorful.

Spending a block of time, I got the sheared length of pipe out of the T that was flooding the yard and threatening to make a sinkhole.  Actually I ended up pushing that bit of plastic in the pipe which will probably plug something else up some day, we shall see where later on.  That's another psyche bulge in the balloon of the sprinklers.

Looking around I found everything but the bits I needed and made a weird contraption that will work until I can get to the big box store.  It should be flush with the turf but this will do for now.

But until then, it's a matter of walking around and looking for mud.  After all, your sprinkler system will bulge and create a sinkhole for you, and if that happens, your house or your pool could be underground instead of on it.

That's what happens when your sprinkler system breaks.  Your house goes insane and you step in something that you shouldn't.